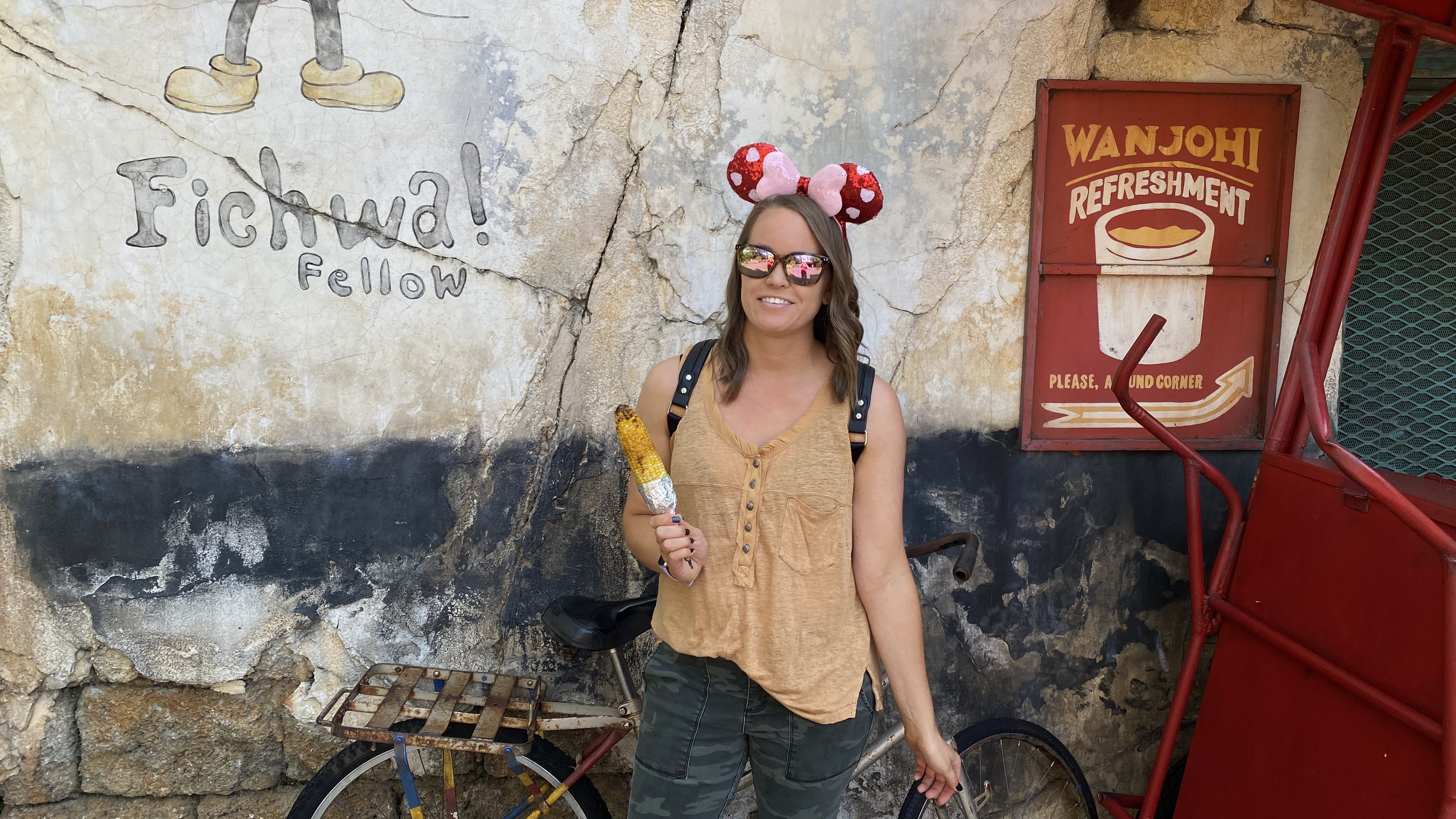 With so many places to eat across all the Walt Disney World parks and resorts, narrowing down where to dine can be a daunting task! Not to mention, sometimes your stomach just doesn’t have room for everything you want to try. Here is a rundown of everywhere we ate and honest reviews of what I thought.

Gideon’s Bakehouse
These cookies are all the rage at Disney Springs. There is often an extremely long wait – sometimes five or more hours – just to get in to buy them. Gideon‘s spent 15 years perfecting their recipe and each month offer a new flavor along with their standard menu.

If the line is long, they will do a mobile queue and when you check-in, you’ll be given a return time. Luckily for us, the wait was 20 minutes and it went pretty quickly. The interior of the bakeshop is very gothic and looks like an old bookstore. I loved the vibes!

Each cookie is a half pound – we tried the Frankenstein, Bride of Frankenstein and the OG Chocolate Chip and ate them over several days, even bringing them home with us. They stayed fresh the entire time and tasted as good on day 6 as they did on day 1. That’s really something. And that chocolate chip had just the right amount of sea salt mixed in with the chips to give it a savory and sweet flavor.

Does Gideon’s Bakehouse have the best cookies in the world like so many have proclaimed? I will say they are extremely good, but I stop short of saying they are the best cookie ever. I wouldn’t wait more than 30 minutes for them, but I would definitely get them again if the line is short. Each cookie is $6.

Swirls on the Water
This little refreshment stand is now the place to get Dole Whip in Disney Springs. They often have seasonal Dole Whip flavors and while we were there, they had a special Hocus Pocus themed flight with the classic pineapple flavor, cheesecake and pumpkin.

The candy pieces that adorned the Dole Whip were really more for decoration and kind of waxy tasting. As far as the flavors went, the pumpkin was my favorite and tasted like you were eating pumpkin pie. We also really liked the pineapple, but there was something odd about the cheesecake. The witches flight cost $6.49.

Chef Art Smith’s Homecomin‘
This farm to table restaurant was developed by Chef Art Smith who used to be Oprah’s personal chef. They specialize in fried chicken and moonshine and offer up a menu full of southern inspired plates. Reservations are recommended and are often hard to come by – in fact I lucked out and found one just a couple days before our trip.

The food here was fantastic. Easily the best meal of the trip – my dish was packed full of great flavors and the portion sizes were enormous. I got the chicken fried steak ($28) and it melted in your mouth. The white gravy was salty and paired so well with the meat and mashed potatoes. This entre also came with green beans and a delicious cheddar biscuit. I would absolutely recommend that you eat here when you visit Disney Springs!

Corn on the Cob from Harambe Fruit Market
This is the perfect snack! You can find this grilled corn on the cob at the Harambe Fruit Market in the Africa area of Animal Kingdom. Order it with or without the African spices, but I recommend the spice version! It gives the sweet corn an extra something that’s hard to describe, but oh so tasty. And at $5.29 a pop, this is a pretty inexpensive snack in the park.

Satuli Canteen
Pandora’s quick service restaurant has a variety of food options, including the infamous cheeseburger pods. Since I had those last time, I thought I’d try something different and went for a noodle dish with grilled chicken. While this was ok, I didn’t love some of the elements in the dish.

Since I had to mobile order, it was hard to tell that the noodles came already cooked in a sauce, so I added a garlic sauce thinking they would be dry otherwise. It turned out to be a creamy sauce that tasted weird with the noodles. This also didn’t need boba balls with it. The chicken was really good, but if I had to get this again, I would not order an extra sauce with it or add the veggies or boba.

Check out my post from 2020 to see what I thought of the other things we ordered from Satuli Canteen and get those instead.

Liberty Tree Tavern
This sit down dining restaurant in the Magic Kingdom serves up Thanksgiving style food in a setting that makes you feel like you just stepped into the colonial era. It’s $39/adult and $21/child for lunch or dinner. Pre-pandemic, Liberty Tree Tavern was a buffet, but now it’s all you care to enjoy and they will bring you more food as you request it.

Your meal starts with a salad and fresh rolls and is followed by the Patriot’s Platter, which contains roasted turkey, pot roast, roasted pork, mashed potatoes, vegetables, stuffing, and macaroni & cheese. Dessert concludes the meal – we had toffee cake, which was absolutely delicious.

My complaint here was that the meats had a mushroom gravy on them. Neither of us like mushrooms, but the menu only specifies mushroom gravy with the vegan option. Disney is great about accommodating guests if they want something left off their food, so I definitely would have selected no gravy had I known it was mushroom based.

We really liked this one – it blends ginger ale and blackberry flavors together and comes served with edible glitter and a mint leaf on top. It was refreshing, sweet and the perfect drink for a warm afternoon in the park. Just under $5.

We both enjoyed our tarts – think pop tart but better and the pumpkin was light and not too overwhelming with the flavor. They usually have different seasonal varieties, so the flavors come and go, but we’ve yet to have a bad one. Each tart is $4.29.

Docking Bay 7
Located in Star Wars Galaxy’s Edge, Docking Bay 7 has some great food options! It was one of my favorite meals last time we were in the park, so I definitely wanted to return this time. Mobile ordering will save you quite a bit of time and wait and your food will be ready pretty quickly. There are places to sit down inside when your food is ready and the whole place is Star Wars themed and has a pretty cool atmosphere.

We both got the Fried Endorian Chicken Tip Yip, but Adam decided to get the spicy version. Last time, mine came with a yummy green gravy, so I was disappointed they had changed the dish and it no longer comes with that. While mine was good, the spicy version was even better, so I wish I had ordered that instead! Next time I will go with that option if it’s still available. Plan to spend between $15 – $18 per entre at Docking Bay 7.

Trolly Car Cafe
I’ll let you in on a secret – Trolly Car Cafe is really just Starbucks but renamed to fit the theme of the park. I stopped in here to pick up a seasonal treat, the pumpkin cheesecake mousse. This was one of the prettiest fall treats and tasted just like pumpkin pie. This little treat will cost you $5.49.

Food & Wine Festival was going on at Epcot, so the park was full of extra delicious food to try! We park hopped over to Epcot twice as well as spending an entire day here, so I was able to try several different booths from the festival.

India
I would have tried everything at the India booth, but had to save room in my stomach so I decided on the samosas. They had a cilantro crema on top that was spicy! I really enjoyed the flavors and they were a nice portion size for the price. You get two for $5.25.

Mexico
The margaritas in Mexico are legit! I tried the blood orange charm margarita with a pink peppercorn and chili sugar/salt rim and it was delicious. This was a unique spin on a classic drink, although at $12 a piece, they were a bit pricy.

China
At the China booth, I picked up the pan fried chicken dumplings that came with a sweet and spicy sauce. These really hit the spot, but they’re kind of on the smaller side so they won’t fill you up. The flavor of the sauce is tangy and pairs nicely with the dumpling. You get two for $5.

Fry Flight
One of the new offerings at this year’s Food & Wine is The Fry Basket. Located near Test Track, it’s kind of away from the rest of the booths, but they offer a fry flight this year. You’ll get three different flavors of fries – two savory and one sweet: sea salt and malt vinegar, barbecued bacon with smoked aïoli, aweet potato casserole with candied pecans, toasted marshmallow cream and caramel whisky.

We were split on these – I enjoyed the savory options much more than the sweet and my husband thought the sweet potato fries were the best. The portion sizes are great and really at $7.50, you can’t go wrong with this one.

Biergarten/Germany
Biergarten in the Germany pavilion is back to their buffet, which had gone away during the pandemic. This is one of the best restaurants at Epcot and even picky eaters will find something they like. We had lunch there, but also grabbed an apple strudel with vanilla sauce from their booth at the Food & Wine Festival. This was a delightful dessert and you can get it year round at Biergarten if you want. This is also one of the cheaper options at $4.25 a piece.

Regal Eagle
This one exceeded expectations! Regal Eagle has several kinds of BBQ sauces to choose from and you can get pulled pork, brisket, chicken, ribs or even a salad at this American eatery. We shared this platter for $12.99, but it really wasn’t enough to feed two people so I’d suggest each person ordering their own unless you really aren’t that hungry. They also have a very extensive menu for gluten and allergy sensitive diets.

Norway
I stepped out of my comfort zone with Norway and it turned out to be the biggest surprise of the trip! School bread, which is a cold pastry that’s filled with custard and topped with vanilla icing and coconut, is a polarizing item from Kringla Bakeri Og Kafe. I don’t like coconut, but it looked so good and I really wanted to give it a shot and I’m really glad I did.

This was the perfect start to our day in Epcot and the vanilla custard is delicious. I barely noticed the coconut and I’d absolutely recommend everyone try this pastry at least once when you are in Epcot.

I hope you’ve enjoyed this food tour through Walt Disney World in Orlando, FL. Be sure to follow along on my YouTube channel for more from the Disney parks!