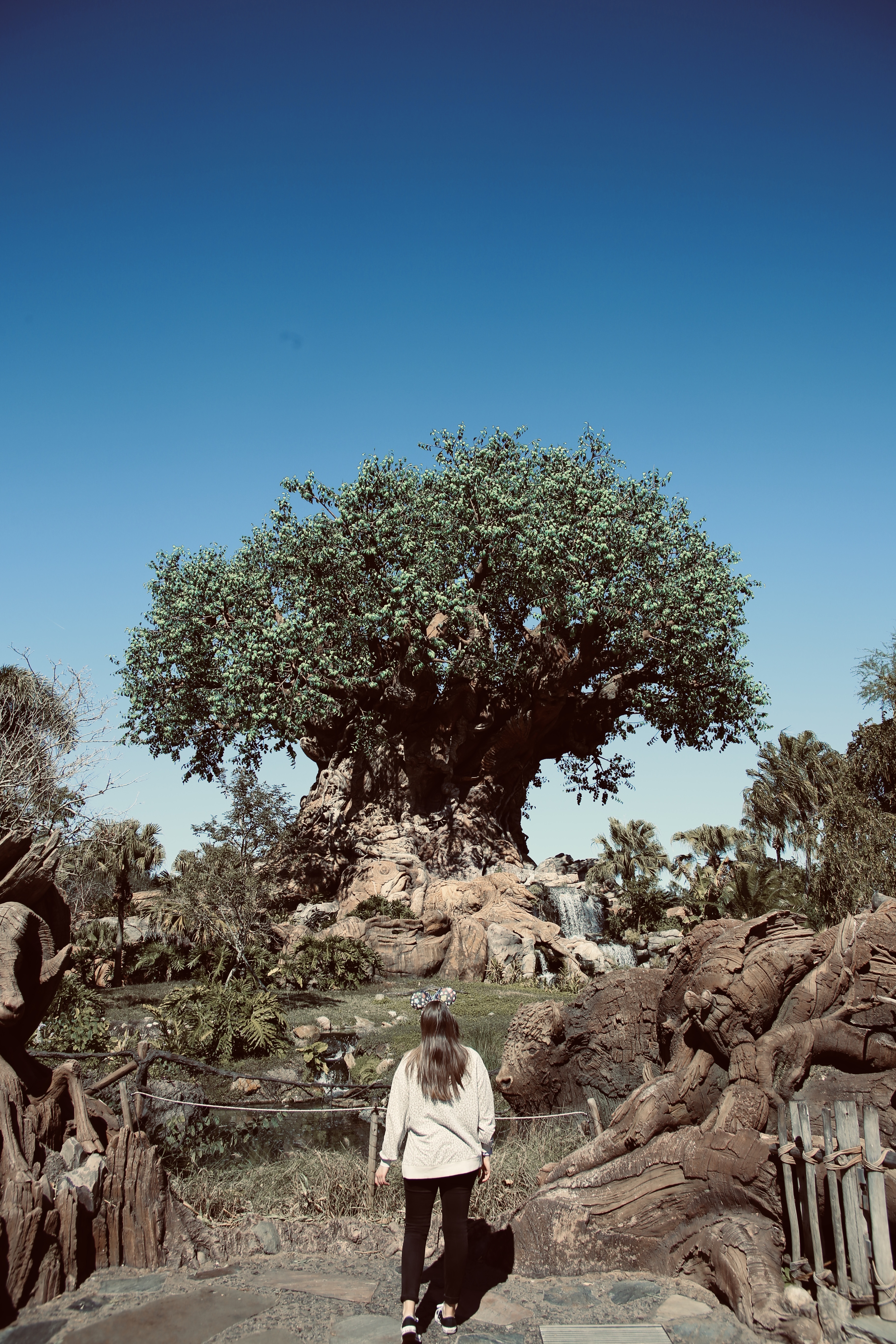 Disney’s Animal Kingdom is also their most quiet and relaxing park. If you need a down day during your vacation – this is the park to chill at. We saved it for last (well, my last day – I went to Universal our last day and my travel companions went back to Magic Kingdom) and it was so quiet that we rode everything in an hour!

Which is why, unless the lines at Pandora are extremely long, you probably can do this park in a half day and park hop over to another park you really want more time in.

Like the rest of the Disney parks, characters aren’t doing meet and greets at Animal Kingdom during COVID, but they are doing fun boat rides on the river that goes through the park. We saw Chip & Dale, Donald, Daisy and some of their friends a few times during the day.

A new part of the park that was added since I last visited Animal Kingdom is Pandora Land. I’ve never seen the movie, but like all the thematic lands at Disney, they created another immersive experience that anyone can enjoy. The big draw here is of course, Flight of Passage, which can sometimes have HOURS long waits. We pretty much walked on this one – it took probably 15 minutes to get through the line queue, which is a cool stroll through the land itself, so even if your wait is three hours, you won’t get bored.

A lot of people say Flight of Passage is one of Disney’s best rides and I definitely enjoyed it because it had interactive components like smells and water spraying on you, but 3D rides are not my favorite type of ride and I think I’ve figured out why.

The images aren’t clear and never have been for me – I always thought that was just how 3D was supposed to be. But apparently it’s not that way for everyone and I’m guessing my astigmatism is the reason why – much like night time driving, there are blurry edges on 3D images and it makes the experience not as fun as other people seem to have with it.

The food in Pandora is out of this world, though! I highly recommend Satu’li Canteen. I got the cheeseburger pods, which is basically a McDonald’s cheeseburger inside a steam bun. You also get seasoned chips and a vinegar based slaw too. I would get these again!

For dessert I had the Blueberry Cream Cheese Mousse, which was a delicious combination of flavors. Adam and Drew had the chocolate dessert, but the blueberry was a better option in my opinion.

The colorful drink called a Night Blossom can be purchased outside Satu’li at Pongu Pongu. It’s as good as it looks and very Instagrammable. You can get it with alcohol too, if you’d prefer a little pick-me-up.

With so few people in the park, we were able to ride everything in an hour. Isn’t that crazy? Another reason why you could easily only spend a half day in this park. Don’t skip it altogether though, because then you’d miss out on Expedition Everest – Disney’s best coaster. We rode it four times in a row, getting right back on as soon as we got off. I seriously love this coaster and it’s unexpected twists and turns. Sit in the front if you can for the best experience!

You’ll also find fun art around Animal Kingdom and much of it pays tribute to Lion King. I’m not sure why there isn’t a Lion King themed ride, but that would be a fun one!

Another missed opportunity (according to us) is a Black Panther themed area of the park. We’re not completely sure this could happen because Universal owns the rights to many Marvel characters, preventing Disney from creating an Avengers campus in Florida. If you’re curious how all that works, read more here.

All in all, a nice relaxing day at Animal Kingdom! Make sure you do some of the walking trails to see some animals up close and go on Kilimanjaro Safaris where you’re sure to see lions, giraffes and learn about the animals in their habitats.