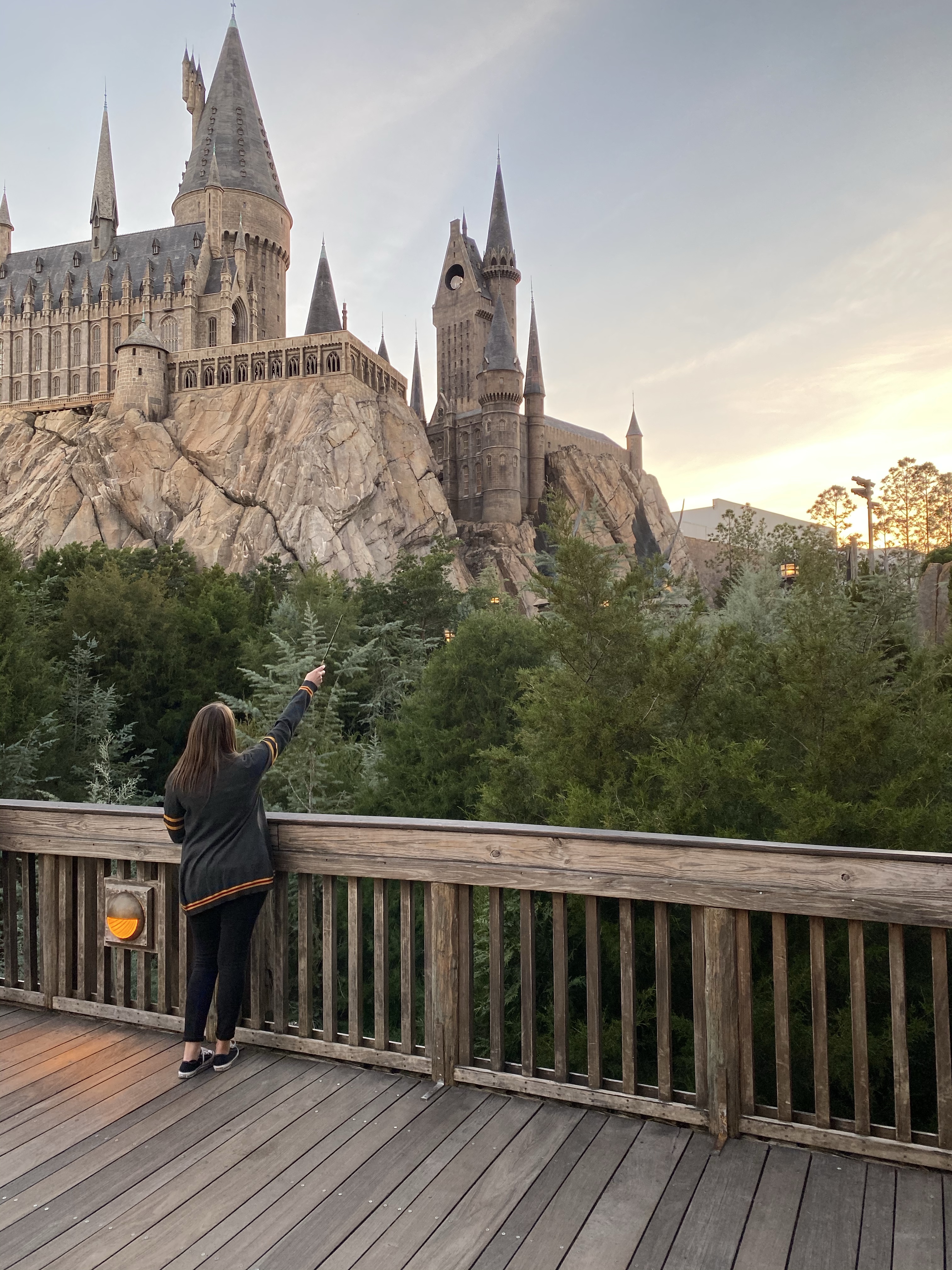 On our last day in Orlando, I decided to skip going to Disney with the rest of the family and bought a ticket to Universal Studios so I could go back to Hogwarts again. I first visited this park three years ago with my mom – we just had one day there and spent most of the time in the Harry Potter part of the park, but I loved Wizarding World and couldn’t wait to get back.

Traveling solo is fun for me, so I had no reservations about going to a theme park by myself! The only thing that didn’t always work out very well was trying to get photos of yourself – I did drag my tripod along for a few shots, but people made weird comments about it that were passing by, so I felt kind of self conscious about doing that here and eventually found a couple people to take a few photos of me in exchange for me taking some of them.

Like Disney, Universal has limited capacity due to the pandemic. Crowds were even lighter at this park and for a while during the morning, I was sometimes the only person on the rides! Things picked up a little in the afternoon, but there were only a couple rides where the wait was more than 30 minutes. Single rider lines obviously help when you are a solo traveler, but almost everything was walk-on and you didn’t even need them this time! I would imagine the park will get more crowded in the months to come as things open up and people are vaccinated.

Universal isn’t really doing character meet and greets either, but there are a few opportunities here and there. Optimus Prime was hanging out for photos and Minions and Simpsons characters were out and waving at people too.

To maximize the day, I decided to hit up all the non-Harry Potter rides for a few hours right after the park opened. I knocked out The Mummy, E.T., Men in Black, Fast & Furious, Rip, Ride, Rock It Roller Coaster and watched The Bourne Stunt show. That was super cool, but it ate away at an extra 20 minutes of my day because the moving sets had technical difficulties two times during the show.

Since it was creeping up on noon and the park was set to close at 7 p.m., I made my way to Diagon Alley to do some spells, ride Escape from Gringotts and do some shopping in Nocturn Alley. The Tales of Beedle the Bard was going on around that time too, so I caught a bit of that show while I was there.

Then I hopped on the Hogwarts Express, which was kind of a long wait at that time of day, however as the afternoon went on, the wait times got up to 70 minutes, so I won’t complain about 30. This is a MUST DO if it’s your first time in Universal, but be aware, you need a two park ticket to ride the Hogwarts Express. Hogsmeade and the castle are in Islands of Adventure and to visit that part of Universal, you need a ticket. And you’re going to want to because what Harry Potter fan doesn’t want to see the Hogwarts Castle??

When you leave the Hogwarts Express, you’ll walk into Hogsmeade and notice the beautiful snow covered rooftops. It looks exactly how you’d imagine it from the books! Also, make sure you go to the bathrooms on this side of the park – Moaning Myrtle hangs out in the restroom and it’s kind of a fun experience.

By this time it was time to eat. Like Disney, mobile order is the way to go right now to get your food at Universal. Last time, I ate at Leaky Cauldron, so this time I decided on Three Broomsticks. You place your order, get in the line to be seated and once you are at your table, hit “prepare my food.” This maybe took 15 – 20 minutes total from line to the time the food was on the table, so a pretty fast experience when I was there.

Lunch was beef pasties, which comes with a side garden salad. For the price and size, I felt like I should have gotten more than three of the pasties, but they had a good flavor. I don’t know if I would order them again as a main meal, because I think I liked the food over at Leaky Cauldron better, but I definitely wanted to try someplace different this time and don’t regret eating there.

Following lunch, I rode Flight of the Hippogriff and Forbidden Journey. Both those were walk on rides as well! One minor complaint about Universal that actually plagued me throughout the day is the free lockers. You must store your things in lockers to ride nearly every ride in the park and if it’s a small bag, there’s no charge. HOWEVER, if your ride takes a little longer than the posted wait time, the locker expires and you can’t get it open and it wants to charge you. This happened a few times and on the Harry Potter side, they wanted to argue with me about it. Other people were having the same thing happen to them, so that’s definitely something the park need to fix. I get not wanting people to dump bags for an entire day, but 5 minutes over? Come on.

I then made my way over to the newest ride: Hagrid’s Magical Creatures Motorbike Adventure. And it was down. For nearly four hours, which was almost until the park closed. I wasn’t sure I’d get to ride it at all, which gave me some anxiety for the rest of the day, but luckily it got up and running about 30 minutes before park closure!

Since Hagrid’s was down, I decided to head to Marvel Island and ride the Spiderman ride (which I didn’t get to do before) and the Hulk coaster. That one was a favorite from my previous visit and I had a blast this time too. I think it’s actually my favorite roller coaster I’ve ridden anywhere. Unfortunately the line was way too long to ride it again – it took about 40 minutes to get through, so I headed back toward Hogsmeade for a butter beer.

Finally, it was time! I got in the line for Hagrid’s and the ride broke down…twice. There’s a lot of detail in the queue, so at least I had things to look at, but this would have been a nice time to have someone to talk to. After about 40 minutes, I finally got on the ride and let me just say, it’s worth every bit of the wait and stress over possibly not getting to ride it. I know I had a smile on my face the whole time and it’s just a fun coaster with unexpected twists and turns and great theming. I only wish I could have ridden it more!

The sun was setting over The Hulk, which made for a perfect end to a perfect day.

A couple things to note about Universal right now: masks are required, but I felt like they were much less strict than Disney about them. Disney did not allow neck gaiters; Universal did. And I saw many people taking their masks off to eat while walking through the park. Disney doesn’t allow this either. They give you hand sanitizer before each ride and a staff member is there to make sure you use it. Disney was on the honor system with this.

I felt extremely safe at both parks. Crowds were light everywhere and with only a few exceptions, people did what they were supposed to. I’d recommend packing two masks if you’re planning to ride water rides. I would imagine things will get busier as more people are vaccinated, so if you want a great experience with very short wait times at these parks, go if it feels safe to you!

Have you been to Universal recently? What was your experience like? Let me know in the comments!