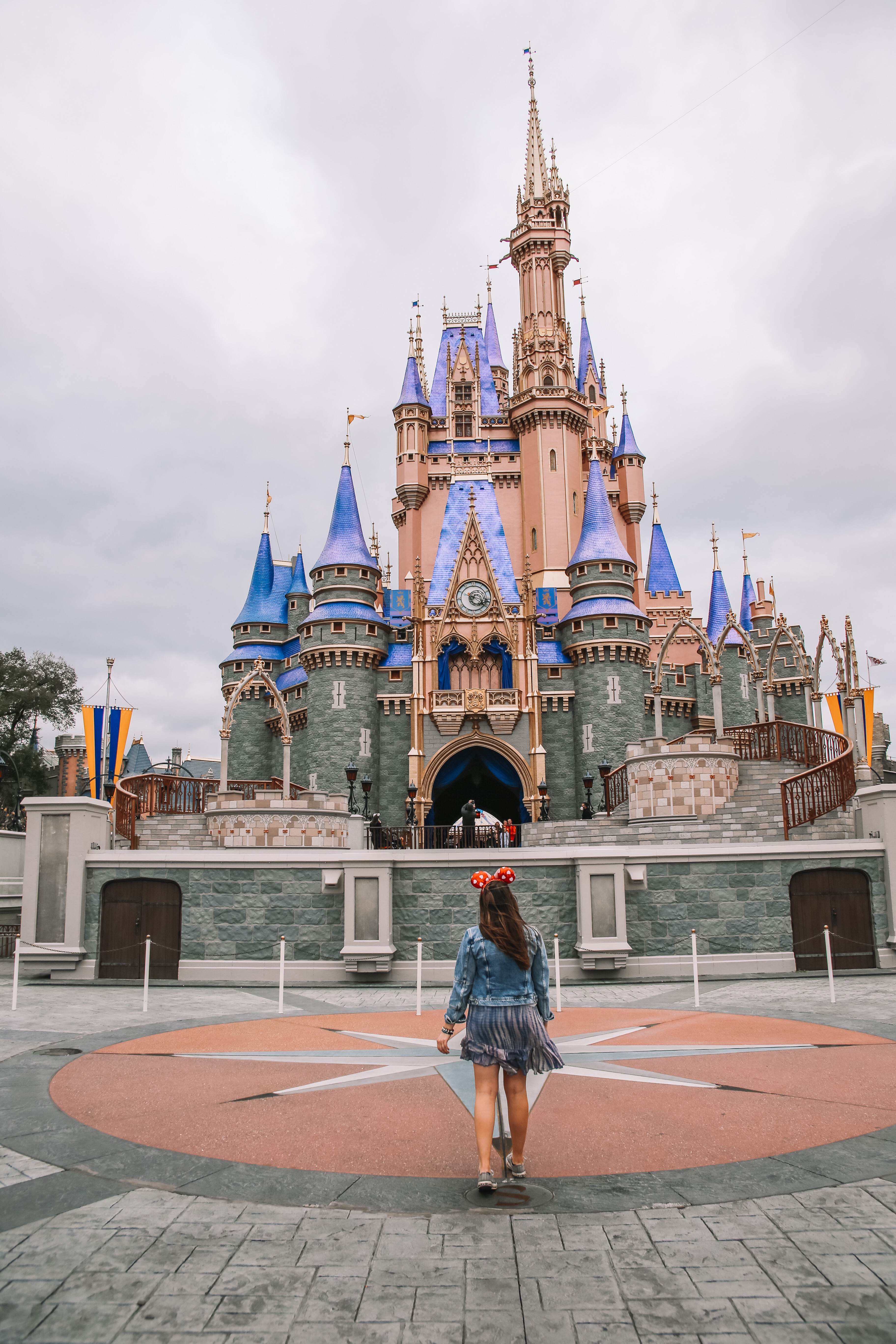 Magic Kingdom is probably the most popular of all the Disney parks. All the iconic rides and sights are there – Cinderella’s Castle, It’s A Small World and the mountain rides. In non-COVID times, it’s also the best place to meet the characters or dine with them, however none of that is going on right now but you’ll still be able to see some characters from a distance!

I spent one day in the park (Adam and Drew did a second the day I went to Universal) and with the exception of Seven Dwarfs Mine Train and Pirates of the Caribbean, there were no waits for rides. We started off the day by getting wet on Splash Mountain, which may the the last time we see this classic Disney ride in current form. It’s scheduled to be rethemed sometime in the future to “The Princess and the Frog.”

One change at Disney due to the pandemic is mobile order ahead and reserved dining. In the Disney app, you can choose your park, food service location and order for a future pick-up window. Once that window of time rolls around, you’ll tap a button in the app to let them know you’re there and to prepare your food and in a few minutes it will be ready for you.

Cheshire Cat Tails, one of Disney’s most popular snack foods, is usually sold at Cheshire Cafe. They’re currently closed because of the pandemic BUT Cosmic Ray’s is selling them instead. We each got one of these fun pastries, which tasted like a chocolate chip croissant.

When you’re done eating your Cheshire Cat Tail, head over to one of Magic Kingdom’s most Instagrammable spots, The Purple Wall. Disney has several popular walls around their four parks, but this one has to be the most photographed – there is even merchandise in the gift shops with the purple wall pattern on it. Find Disney’s Purple wall at the entrance to Tomorrowland.

One great thing about this trip was traveling with someone who is a Disney annual passholder. My brother-in-law was able to show his Magic Band to the photo pass photographers as well as the ride picture photo ops and we got lots of unique pictures on this trip! For the Space Mountain picture, which is one of my favorite rides in Magic Kingdom, we coordinated what we were going to do and since he’s been so many times, he knows exactly where the camera are and we were ready for this one 🙂

After riding rides all morning, it was time for some lunch! We walked at least 13 miles each day in the parks, so all that walking and moving about makes you pretty hungry. I picked Jungle Skipper Canteen, which was one of the options that required reservations. They serve a mix of Asia, South America and Africa inspired dishes.

I got the Falls Family Falafel plate and Adam got Orinoco Ida’s Cachapas. I thought both were really tasty, but as a pickier eater, Adam wasn’t especially thrilled with his selection. This restaurant may not be the best option for less adventurous eaters.

After lunch, we knocked out some more classic rides like Pirates of the Caribbean, Mad Tea Party and the Many Adventures of Winnie the Pooh. I was also especially excited to ride Under the Sea since that whole area of Magic Kingdom with Ariel’s Grotto is a completely new addition to the park since I was last there.

One final treat that I had to try was the Peter Pan float from Storybook Treats. This was one that ALL the Disney bloggers raved about. It’s lime Dole whip over Sprite and the feather to represent Peter Pan’s hat is a piece of chocolate.

Maybe it needed to be a hot day, but I was really disappointed with this one. The lime was not good – it was so artificial tasting that I had a hard time eating it. Mixed in with the Sprite made it better, but I’d recommend skipping this one. Very pretty and instagrammable, but doesn’t live up to the hype in my opinion.

We did not ride everything in Magic Kingdom, opting to skip the more kiddie rides like Dumbo and Aladdin’s Magic Carpet ride. My favorites and must-do for this park are:

Overall, a great (but cold) day at Magic Kingdom. Definitely a different atmosphere without all the characters walking around, but it was nice to be able to ride anything we wanted without having long lines to wait in.

One thought on “How We Spent One Day in Magic Kingdom”