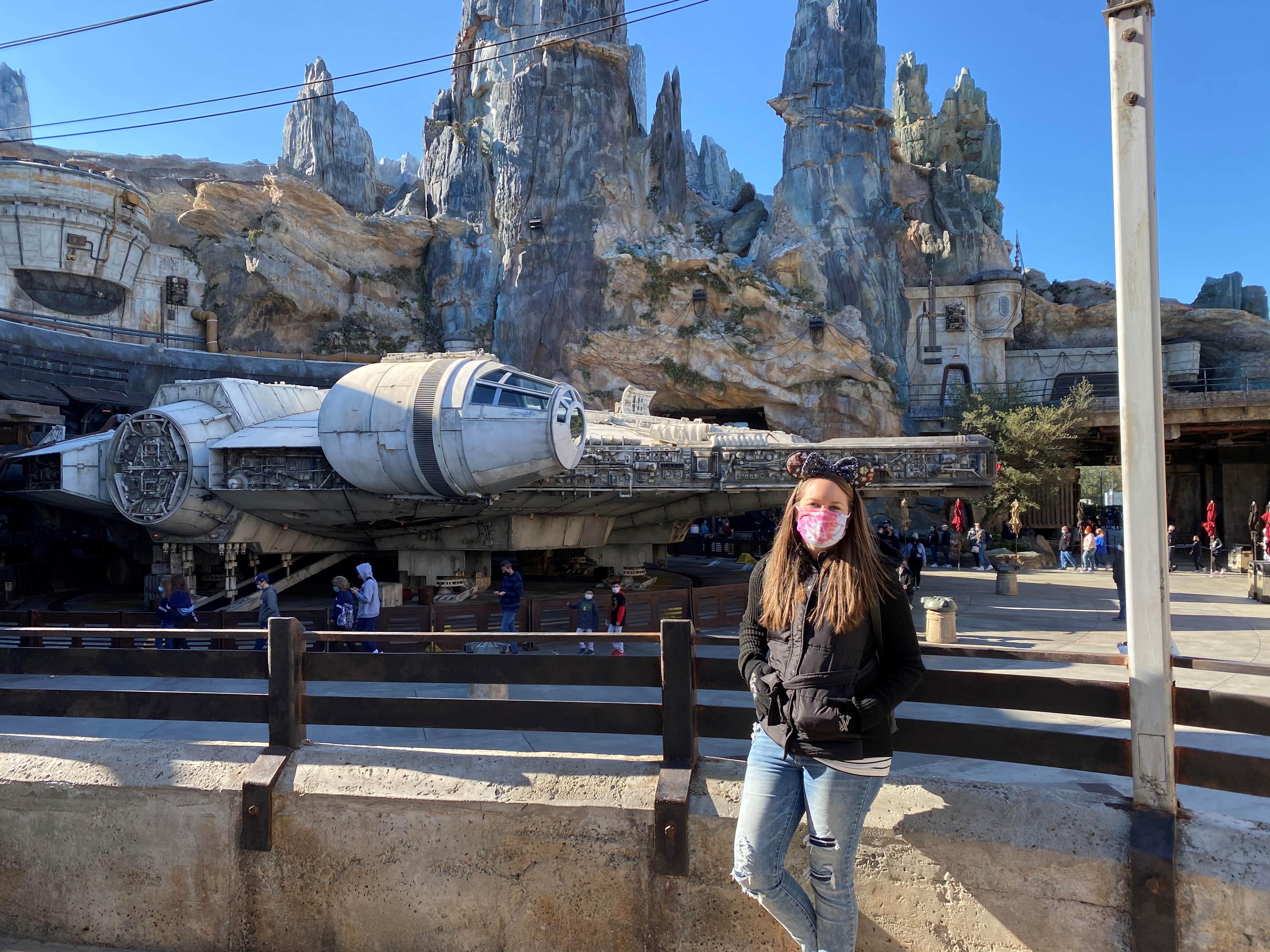 I’m going to go out on a limb here and say that Hollywood Studios is Disney’s best park at the moment. Yes, Magic Kingdom is the classic park that everyone HAS to visit, Epcot has the culture and food, but Hollywood Studios has the best theming and more “grown-up” rides.

I’ve only visited this park twice – once when it was MGM and I was a kid and remember nothing that was there. Then again about 13 years ago when I only had a few hours and before the Toy Story and Star Wars lands had been built. So I didn’t really have huge expectations for this park, but it turned out to be the most fun at Disney and definitely would have been worth a second day if we’d had more time.

The first ride of the day? Mickey and Minnie’s Runaway Railway. This one is one of the newest rides in the park and also one of the most popular. We lucked out and rode it with no wait time. The graphics and cartoon images are very well done and there are several twists, turns and surprises along the way. Kids will love it and adults will too.

Rock ‘n’ Roller Coaster is probably the second best ride in the park! I rode it the last time I went, however this time the music didn’t seem nearly as loud. If you’ve never ridden this roller coaster, it’s one of the best! You shoot through the streets of Los Angeles in the dark to Aerosmith tunes for a rockin’ good time. Lines were not long for this one either and we rode it several times throughout the day.

But you know the real reason people go to Hollywood Studios, right? Star Wars Galaxy’s Edge! Even non-fans need to check out all the intricate planning Disney put into this part of the park – you definitely feel like you’re right there, immersed in the fictional land.

Of course I tried that blue milk, which also comes in a green version. It wasn’t my favorite and I’ve heard that you either love it or hate it and I fell more on the hate it spectrum. It’s basically a fruity coconut milk that’s semi-frozen into a slushy. I’ll try green if we go back, but it’s not a must have each time and at $8 a glass, definitely on the pricy side.

Docking Bay 7 had the best food in the park and a cool atmosphere! The Ronto Wrap came from Ronto Roasters, but I believe you can also get them at Docking Bay 7 when it’s closed. Everyone said to try the Ronto Wrap and it honestly did not look or sound that good, but after hearing so many great reviews, I decided to give it a shot. It ended up being the best thing I ate the entire trip! It’s roasted and grilled pork on a pita with a peppercorn sauce and vinegar based slaw. Yum!

Adam got the Smoked Kaadu Pork Ribs, Drew got Felucian Kefta and Hummus Garden Spread and my second meal was the Endorian Fried Chicken Tip Yip. The green gravy that came with it was out of this world – it had some great herb flavor and also some heat to it. I can definitely recommend any of the dishes we got at Docking Bay 7.

Now on to the rides! Rise of the Resistance is still doing mobile boarding passes at 7 and 1 each day. We did not get them at 7 a.m. and weren’t really sure we’d be able to get them at 1. They go in seconds and even though the parks are at a lower capacity, Hollywood Studios is the most popular park to go to right now and is often the busiest of the four. Luck was on our side and we got a boarding pass for late afternoon.

I won’t spoil it, but I will say it’s probably one of the coolest rides anywhere. The experience is completely immersive, there are unexpected ride sequences and a LOT to take in. You really need to ride it multiple times to see everything going on, but that’s probably not going to be likely any time soon.

Smugglers Run is also fun, but it had the longest wait time. Around 45 minutes, I think. The line queue is really cool though and it’s another one you want to ride more than once if you can so you can be pilot if you’re not assigned that at the beginning.

Another new addition to Hollywood Studios is Toy Story Land. The details here are incredible too and the rides are so much fun! We did Toy Story Mania three times – you will board your car and get ready to shoot your laser blaster at all kinds of 3D objects being thrown at you. Whoever gets the most points wins! Look for the popsicle stick wall after leaving Toy Story Mania – it’s the perfect photo spot.

Slinky Dog Dash, the small coaster that takes you through Andy’s backyard, had long lines all day, but we walked on five minutes before the park closed and rode it at night. I HIGHLY recommend this ride at that time of day – the park was all lit up and you have a great view of the lights in Galaxy’s Edge and it’s a pretty magical experience. This is also a really great coaster – even better than the more popular Seven Dwarfs Mine Train or Thunder Mountain at Magic Kingdom.

And before you leave Toy Story Land, make sure you get something to munch on from Woody’s Lunchbox. This was by far the most popular quick service restaurant we ordered from and it was two hours from the time we placed our mobile order to when a pick-up window was available. So plan for that and maybe order early in the day for a later pick-up time.

They’re known for the “totchos”, which are loaded tater tots with chili, cheese, tomatoes and sour cream. Also popular is the Lunch Box Tart, which rotates flavors depending on the season.

Adam got the Lemon-Blueberry Lunch Box Tart, which tastes “way better than a pop tart” according to him.

Such a great day in Hollywood Studios! And I conquered my fear of Tower of Terror, which I also recommend riding in the evening or at night. It’s definitely the best ride at that park and maybe all of Disney!

What do you think? Is Hollywood Studios your favorite Disney World park? What’s the best ride there? I want to know! Drop a comment below 🙂

2 thoughts on “Is Hollywood Studios the BEST park at Disney World?”