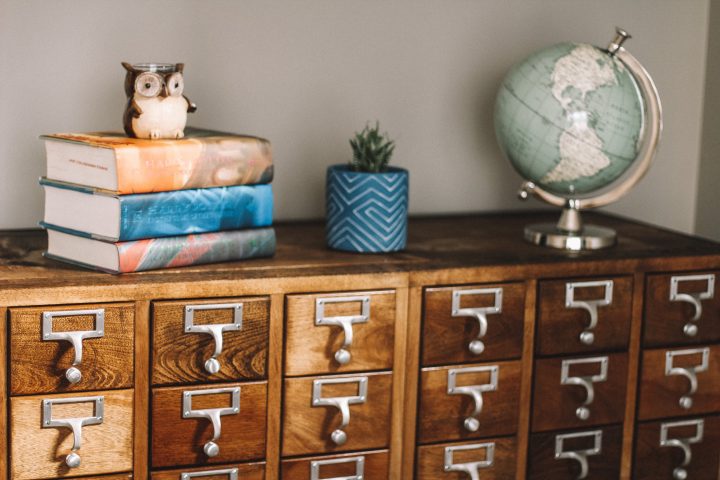 Owning a library card catalog has been one of those dreams I’ve had ever since I can remember. The library system I work for sold their four remaining units several years ago to staff, but names got picked out of a hat and sadly, mine wasn’t one of those.

If you’ve never gone hunting for one, you’d probably be surprised to find out that they go for hundreds and sometimes thousands of dollars depending on size. I didn’t think I’d find one or even be able to afford one if I did. But I got lucky.

Back in May, another member of the Indy Blog Society posted a link her her blog, Two Twenty One, and I was causally scrolling through posts when one about a card catalog stopped me dead in my tracks. I commented on her post in the group and said how jealous I was that she found one on Craigslist for only $85.

Shortly after that, she messaged me and gave me some fabulous news – a friend of hers had one that was just sitting in her garage and she thought she might want to sell it.

My librarian heart was exploding.

The friend uncovered it in her garage and sent pictures. Then, silence. I kept asking, but couldn’t really get a response about price or if I could come get it. Months went by and finally, at the beginning of Sept. as we were about to close on our new house, I sent one last message and FINALLY got confirmation that she’d sell it to me for $100. I immediately went up to her house and somehow got it in my car and up the apartment stairs (these things are heavy, people).

It didn’t have a top or a side and wasn’t on a stand. So it needed some work, but I knew I could handle it. My brother-in-law brought up the sander and we got the frame done in about an hour, then went to Home Depot to get some boards cut.

Let me tell you, that was the worst part of this whole experience. No one would wait on us. We literally stood around for 30 minutes waiting on an employee to finish a personal conversation with some people in the store before going to find someone else that could possibly cut some boards for us. When we finally did, they were rude and for some reason thought I was trying to build the thing from scratch even though I clearly told them what I needed. The boards finally got cut and guess what? The top wasn’t right. So Andrew took it back home with him to get a friend from work fix it so we could put the top on it. And guess what? It STILL didn’t fit. So back to Home Depot we went (because Menards didn’t cut wood) and this time found a piece that was the exact size we needed.

In the meantime, I sanded all the drawers, which took a lot longer than one would expect. There were eighteen in all and the drawer nobs also had to be taken out. I worked on it when I could and did most of it in the garage on a warmer winter day.

Then came the staining. I opted for a darker walnut color and put three coats on the entire piece. It really brought out the wood grain and looks absolutely stunning!

Once everything was stained, I sealed with a semi-gloss poly coating to protect the wood, then put the hardware back on. Here where I ran into another problem – there weren’t enough screws for the hardware! Thankfully, the hardware store had some that were pretty close to what came with the unit. I’m not sure where the remaining screws went since the drawer pulls weren’t on it at the time I acquired it so I’m wondering if they just got lost somewhere.

Then the only thing left to do was put on the legs. I bought black hairpin legs off Amazon that I thought would look nice – they were around $50 for a set of four 28” legs. Since I’m using the card catalog as an accent table, I wanted some that were a little taller and these were just the right height.

We started to drill the screws in without pre-drilling the holes and that was a no go. After pre-drilling all of them, it was really easy to just use a screw driver and attach the legs that way. If you try this yourself, I recommend pre-drilling to make it so much easier.

Once the legs were on, I just had to stain that final top piece and coat it with poly and the project was finished! It looks beautiful in the space and I’m so happy with how it turned out. It’s just the way I envisioned it.