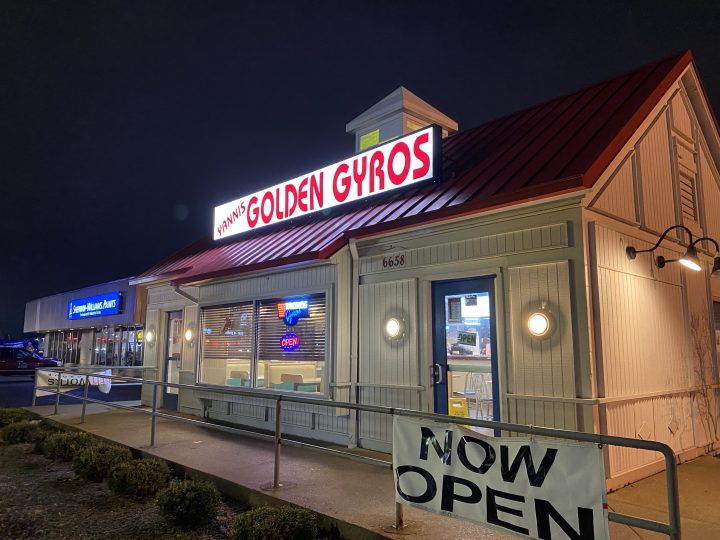 I’m not one to pass up Greek food, so we headed over there one Friday night to see what all the fuss was about. And after having one of their gyros, I can confirm they’re the best thing I’ve had since the one I tried in Greece a few years ago.

Yanni’s is located in an old fast food restaurant. It’s not fancy and there’s not much seating, but

They cook the meat on a large stack on the rotisserie and have both chicken and the lamb/beef combo. You can see into the kitchen while you’re waiting for your food and it’s always fun to watch the process! If gyros aren’t your thing, they also have tenderloins, Italian beef, hot dogs and fish on the menu. If you’re vegan, this probably isn’t the place for you because the only thing on the menu I saw that might work for plant based diets were the salads.

Portion sizes are very generous. We both got combos, but I honestly didn’t need the fries because the sandwich was filling enough by itself. The house made tzatziki was so, so good- I like to call it the ranch of Greek food! Give it to me on pizza, with fries or on pita bread – when it’s good, it’s addictive.

Price-wise, it’s also very affordable in relation to the amount of food you are getting. A combo also comes with a drink, so you get a huge sandwich, a side and a drink for around $8. Kind of hard to beat that even at some fast food places.

So next time you’re in the mood for a gyro or just want to try something new, get yourself on over to Yanni’s! They are located at 6658 W. Washington St. and not too far from the airport.