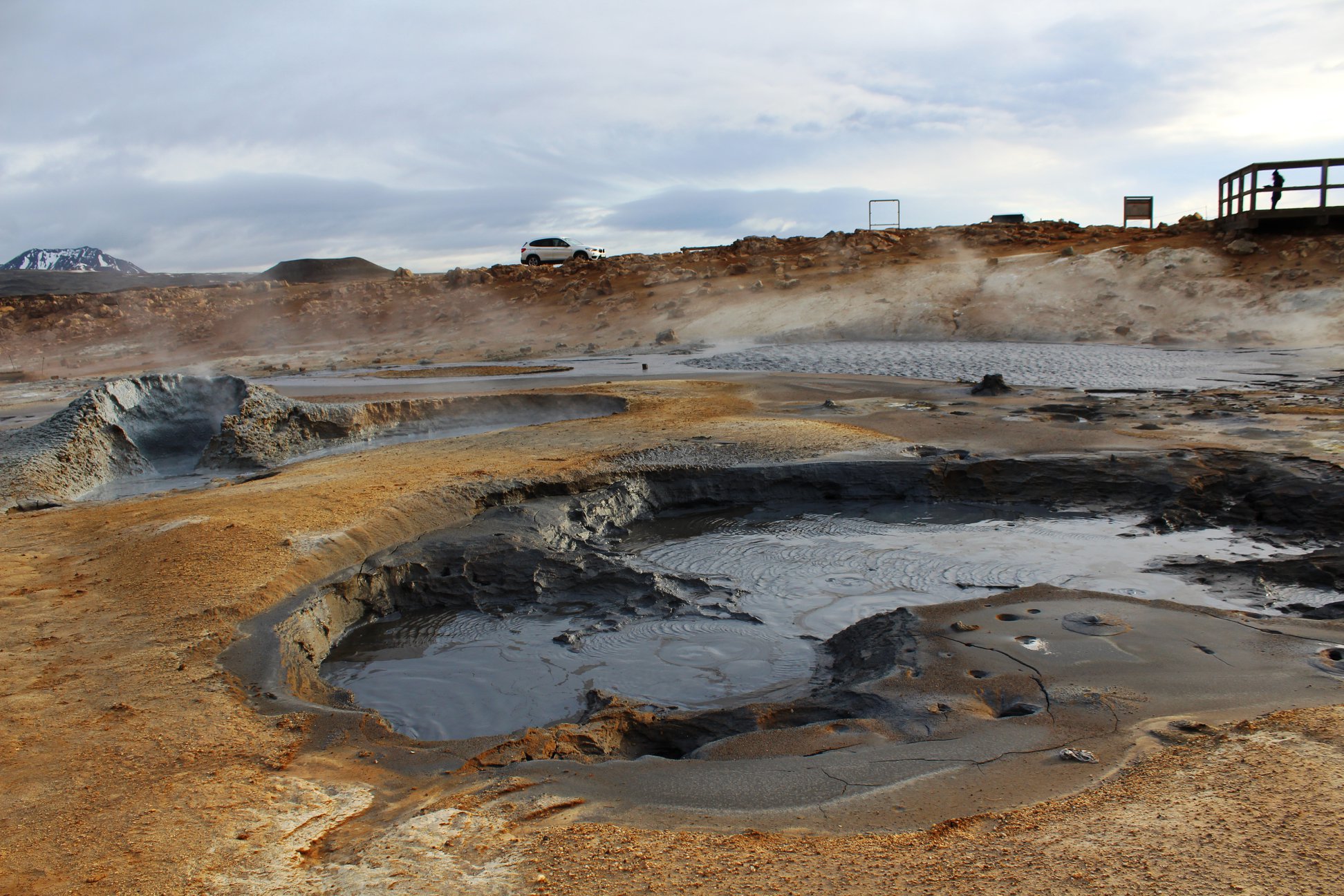 Traveling across Eastern Iceland and into Northern Iceland was such a unique visual experience. We left Seydisfjordur right as the sun was coming up and headed across the northern part of the country toward Iceland’s second largest city, Akureyri. The wind was very intense as we crossed mountains and just as you thought you might be headed out of a mountain range, the road would start to climb in elevation again.

It also looked very different from the rest of the country – for a few hours, I imagined we were on Mars. Snow covered peaks rose out of red rocks and at one point, we even drove through a sand storm. Right before our stop at Námafjall Hverir Viewpoint, we came across a young lady who was standing by the side of the road in the sandstorm. Since we hadn’t passed hardly any other cars on this part of our journey, we pulled over to make sure everything was all right and found out she was hitchhiking! Apparently this is very common in Iceland – the country is extremely safe with almost no crime. We weren’t going the right direction, so we left her and continued on to Namafjall Hverir.

If you’ve ever been to Yellowstone National Park, this stop will remind you a little bit of that. It was a very active geothermal area with bubbling mud pots and loud steam rising from the ground. It’s also extremely stinky and as you drive in the parking lot, the overwhelming smell of sulfuric rotten eggs hits you. The wind was also brutally cold and you could feel it pushing you through the muddy path between the pots. It’s very important not to stray from the marked path here as you could be critically burned by the hot water.

The Myvatn Nature Baths are nearby, which is Northern Iceland’s Blue Lagoon. It’s a bit cheaper than the more popular spot in south Iceland, but we didn’t stop at that one. We continued onward to Akureyri, discovering more waterfalls along the way. We arrived in the town a little after lunch time and were starving so we decided to eat before exploring the town.

I had fish and chips at Akureyri Fish and Chips and it was delicious! Huge portions but no wifi if you’re on the hunt for that. Then we walked up the hill to the church to get a lovely view of the town. We also walked up and down the main shopping street, checking out some of the unique stores near our Air BnB.

As I mentioned in a previous post, the food in Iceland is very expensive so to cut down on eating out costs, we hit up the grocery stores in most of the towns we stayed in for at least one meal. And also because it’s fun to see what’s sold in other countries.

We also discovered a shopping mall by accident and spend some time exploring that too. Toys R Us still exists in Iceland! I also had some ice cream which from a little shop next to the place we were staying and discovered they have some very odd flavors there. The lady working behind the counter recommended salt & pepper flavored ice cream but I passed on that and went with mango and mint instead.