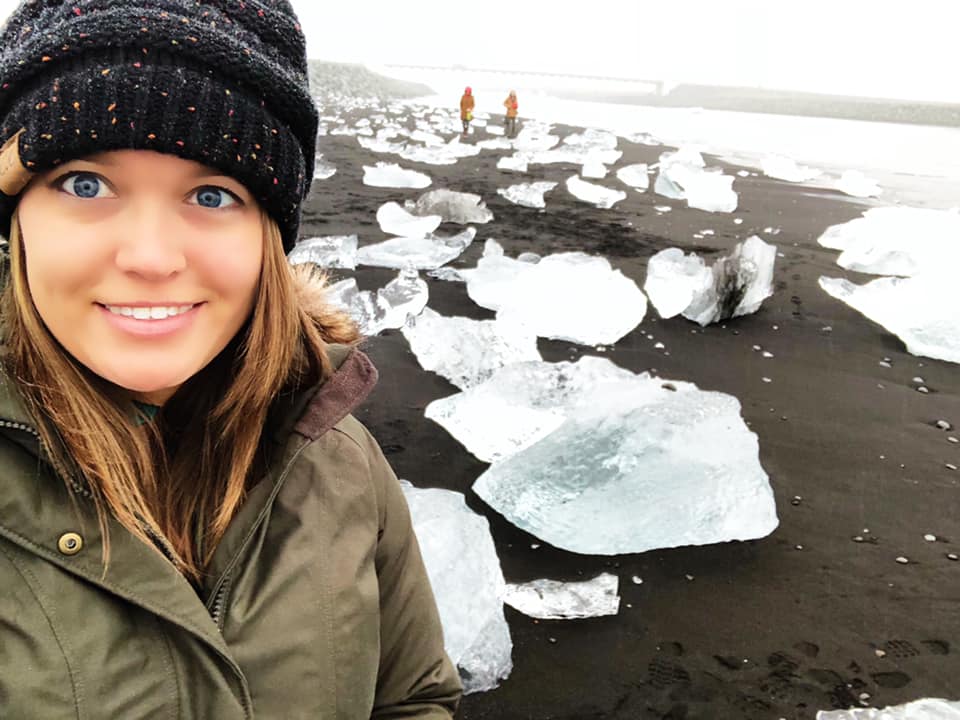 Our third day of exploring Iceland began with a short drive to Jokulsarlon Glacier Lagoon. The road there was pretty isolated from everything else and it was quite a while before we saw other cars. It seems like most people who visit Iceland only go as far as Jokulsarlon then turn around and head back to Reykjavik, which is about five hours away.

It was raining pretty heavily by the time we got to the glacier, so we didn’t stay there long but even with the rain, it was absolutely stunning. The Vatnajökull Glacier, which is Europe’s largest glacier, drains into the North Atlantic and icebergs that break off of the glacier wash ashore on a nearby black sand beach. It’s absolutely stunning to see. You can also take a boat ride in the lagoon to see the glaciers up close and sometimes seals lounge around on them. We didn’t get to do this but it definitely sounds like something unique to do.

From there, we had a pretty long drive to Seydisfjordur, Iceland. Ring Road took us along the eastern coastline, the sun came out and the views were breathtaking. There were very few towns or gas stations along this part of the drive, so I highly recommend filling up before you make that journey. It would not be fun to get stuck in the mountains with no fuel!

Also, even though the drive is longer, avoid the shortcut on 95. I read about it before we went and have heard GPS will try take you that way. Locals on Trip Advisor say it’s a scary drive on a gravel road with hairpin turns and steep drop offs. Many tourists accidentally go this way and have flat tires. We wanted to avoid that so we took Ring Road all along the coast instead.

We finally arrived in Seydisfjordur, Iceland as the sun was setting and it was a charming little town. There aren’t many food options and things close early, so you may want to stop in Egilsstaðir on your way in to eat.

You will drive up and over a mountain range before descending down in a little valley where the town is nestled next to a fjord. A ferry arrives weekly to take people to Denmark and it’s also a good place to whale watch and spot puffins.

We stayed at Hafaldan Harbour Hostel which was very small and very basic. Shared showers and bathrooms. although only maybe eight other people were there that night so it was pretty quiet and easy to get the bathroom to yourself. The owners live on site and are very friendly and put out fresh eggs in the morning for breakfast. They also have lots of information on things you can do in the area.

Here’s a map of our drive/stops on day three.

What do you think of Crumbl cookies? I tried them

My camo jacket didn’t hide me from my neighbors