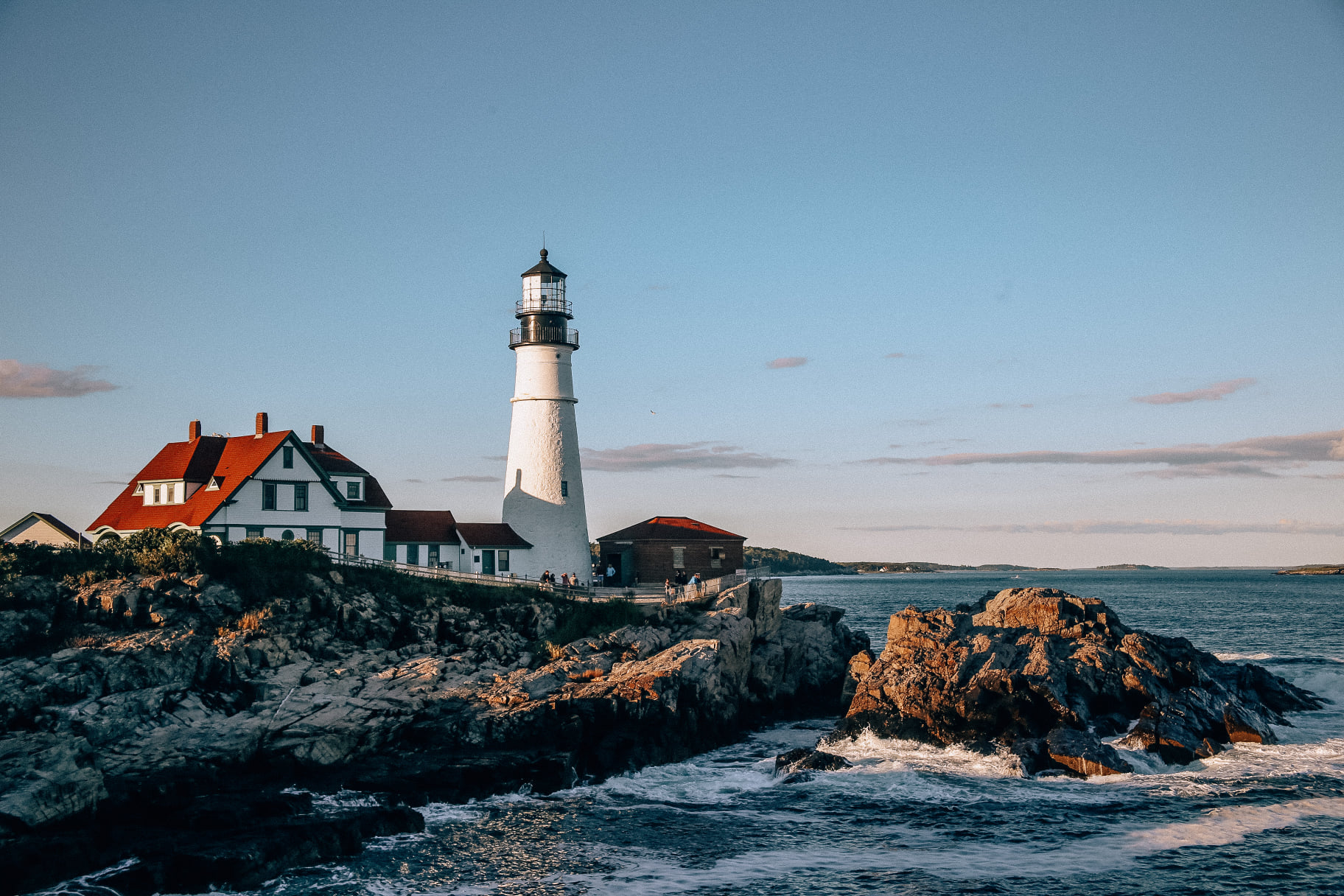 Portland, Maine was the starting point for our East Coast road trip and we only had about twenty-four hours in the seaside town before heading up to Bar Harbor. With a population of just over 66,000 people, you can easily see the highlights in the area in just a day.

We arrive in early afternoon and headed down to the Old Port area. There are lots of shops and restaurants along Exchange Street, which is where we had a late afternoon lunch at The Highroller Lobster Company. This cute little foodie spot has all the hipster vibes and started as a food cart several years ago. While they’re known for lobster, they do have chicken, hotdogs, frozen drinks and desserts on the menu.

Lobster was pretty expensive here, so we opted for crispy chicken sandwiches, fries and whoopie pies. I really liked the Old Bay seasoning on the fries, but the sandwich wasn’t anything special. The whoopie pies, which are a classic Maine desert, tasted a lot like Hostess Cupcakes. I enjoyed them, but they’re big enough to share and very rich!

After eating, we passed by the Henry Wadsworth Longfellow home which is now the Maine Historical Society building, checked out a piece of the Berlin Wall near a pier and stopped to look at the Tate House. This is the only pre-Revolutionary War home in the area and was once owned by Captain George Tate, who served as the Senior Mast Agent for the British Royal Navy. You can normally make reservations to tour the home and grounds on the weekends.

From there, we checked into our hotel (a Super 8 nearby which was kind of noisy, hot and the bed was uncomfortable, so I don’t recommend) then made the short drive to Cape Elizabeth to see Portland Head Light. It was golden hour when we arrived, which made the pictures at the lighthouse turn out so well and there were lots of engagement photo sessions going on as well as professional photographers out capturing the sun set on the lighthouse.

The Portland Head Lighthouse is the oldest lighthouse in Maine and also one of the most recognizable. There is a museum in the former keeper’s quarters and the lighthouse is still in use today, by the United States Coast Guard. The town owns the lighthouse but the Coast Guard maintains the automated light and the fog signal.

There is plenty of paid parking and a ninety acre Fort Williams Park next to the lighthouse where people can walk trails, picnic or admire the ocean views.

After spending some time at the lighthouse, it was time to get some sleep. The next day, before heading out of town, we had to stop at The Holy Donut, though! Hand-made in Maine, these aren’t your average donut – they’re made from mashed potatoes! Sounds strange, but it works. This was a popular spot and according to their website, they make over two million donuts each year.

I had the sea salt chocolate and the pomegranate. Both were delicious, light and tasted much healthier than a normal yeast donut. My favorite was the chocolate out of the two and I’d definitely recommend stopping here for breakfast when you go to Portland. They also have coffee, twenty different flavors of donuts and close when the last donut is sold, so get there early!

While we may not have had much time in Portland and definitely didn’t get to check out all the food places I wanted to, this is a cute town that would be perfect for spending a long weekend in. There are many other things you can do like whale watching in the harbor, going out on a lobster boat or checking out the five other lighthouses in the area.

Have you been to Portland, Maine? Let me know in the comments what I need to see and eat next time I visit!