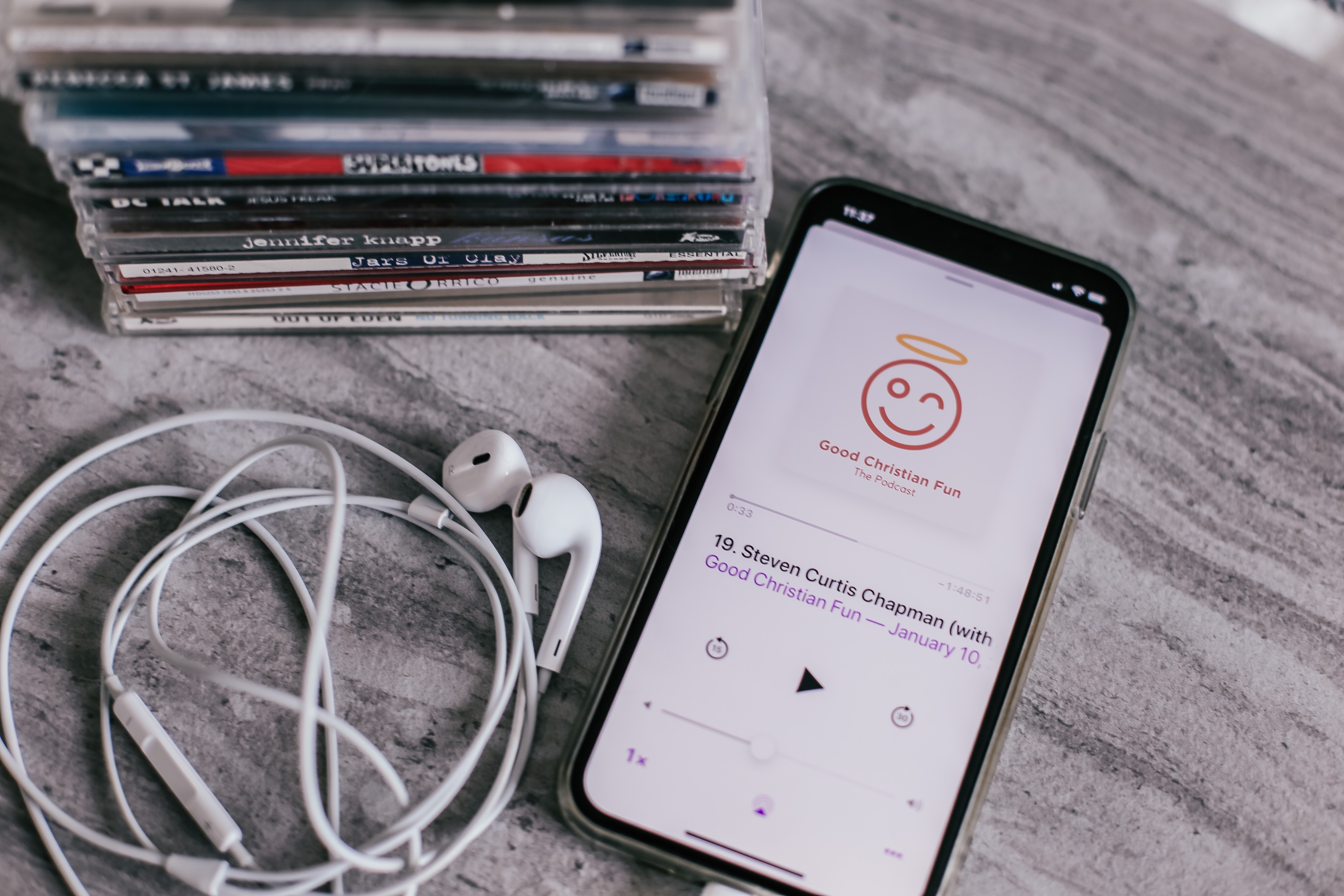 At this time last year, I’m not sure I’d even really listened to a full episode of a podcast. Somewhere along the way, I got tired of listening to music when walking and decided to try something new. Turns out I’ve found a few that I’m really digging!

Good Christian Fun
Growing up in a conservative Christian home, a lot of my middle and high school years were submersed in the Contemporary Christian Music culture (CCM for short). I STILL own albums by Audio Adrenaline, Jars of Clay and Steven Curtis Chapman and saw all those artists several times. Well, Jars of Clay once because they had a long history of canceling shows in my hometown, which made me pretty salty against the band for a while.

Every afternoon was dedicated to a few minutes of Adventures in Odyssey, we watched Veggie Tales and I even tried desperately to get a job at the Christian bookstore, which never seemed to want to hire me and asked weird questions in their interviews. I’m pretty sure I didn’t get hired because I hate coffee.

Anyway, I stumbled upon this podcast completely by accident – one of the hosts also hosts the Gilmore Guys podcast (more on that later) and mentioned this one in passing. Kevin T. Porter and Caroline Ely dive into all things Christian pop culture, starting with the first episode that takes a look at Katy Hudson (aka Katy Perry). It’s nostalgic, an interesting take on a segment of pop culture that gets overlooked and not at all squeaky clean.

How the Heck Are We Gonna Get Along
Unless you know me personally (like off the internet personally), you probably have no idea how much I love politics. I prefer to keep that stuff off my platforms because everyone is so over saturated with it and talking in person about policies and positions on issues is way better than trying to have a conversation about all of it with an internet stranger.

This podcast is relatively new, but brings together a panel of people from different sides of the issues and tries to create meaningful dialog around this crazy political climate we’re living in. Hosted by Clay Aiken from American Idol fame, it’s an offshoot of the popular session at the Politicon convention, which probably won’t be held this year thanks to COVID.

Each episode is generally over an hour, so I usually listen in two parts but it’s been something I’ve enjoying and even though Aiken completely shows his biases, he’s a fun host and typically quite fair with his dialog and discussions.

Behind the Feed
Josie Sanders (now Bullard) is a local creator here in the Indianapolis area. She’s kind of famous for creating the coolest photo for her Instagram, often only using her tripod and camera. Josie started her own podcast a few months ago and takes people behind the scenes of the “influencer” culture with a focus on how others can grow their own brands.

I don’t find every episode to be a topic of interest, but I really do like the episodes that revolve around branding partnerships, editing photos and pitching to brands for collaborations. If you’re a blogger or content creator – the advice and tips are helpful and it’s kind of amazing what she’s built for herself at only 21 years of age.

Gilmore Guys
Two dudes watch and discuss Gilmore Girls. Kevin is a lifelong fan; Demi has never watched the show at all. Each show discusses one or two episodes, starting with season 1. The first few seasons are a bit rough – the guys are figuring out how to podcast and sometimes they can go off on some side conversations that make the episodes run long, but in true Gilmore fashion, there’s lots of dialog and it’s fun to hear two guys talk about my favorite show of all time.

Eventually, cast members come on the podcast for one-on-one conversation, but I haven’t made it to any of those just yet. I’m really looking forward to those episodes though! Once they finish watching the show, they move on to Amy Sherman Palladino’s other shows, Bunheads and The Marvelous Mrs, Maisel.

When the Netflix reboot happened, Kevin and Demi even had a cameo in one of the episodes. It’s definitely been a fun podcast to listen to and I’m even realizing a few things about the show that never occurred to me even though I’ve seen it countless times.

What are some podcasts you’re really into right now? Drop them below in the comments with what they’re about and maybe I’ll go check them out once I finish these. Happy listening!

Like Loading...
Tags: Behind the Feed with Josie Sanders, Clay Aiken, Gilmore Guys, Good Christian Fun, How the Heck are we Gonna Get Along, Lifestyle, podcasts, Politicon