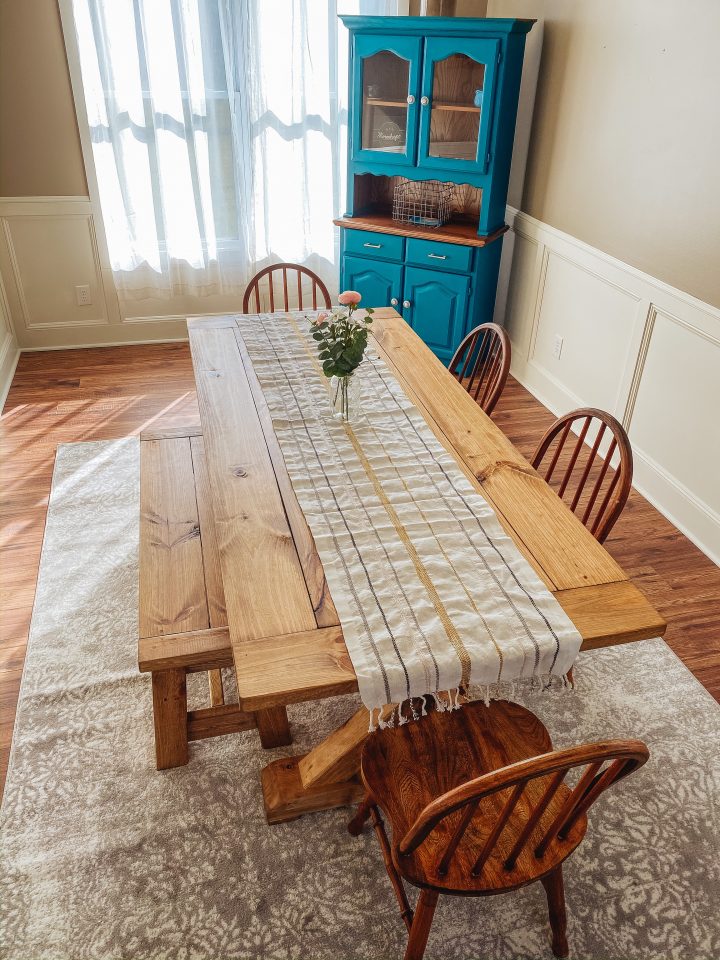 I painted the laundry room, touched up the upstairs hallway, trimmed the shrubs and have done so much home cooking. Another project I tackled was to refinish these vintage farmhouse chairs that belonged to my grandmother. We recently had a table made, but instead of also having the chairs made too, my mom brought a set of chairs up to me that my grandma used to use at her kitchen table.

They’d been sitting in my cousin’s shed for a while and when she built her new house, didn’t have room for them anymore, so I took them and decided to give them a make-over. As you can see, they needed a little attention!

The first step was to sand down as much as I could to get the old varnish off. This was a learning process for me – I wasn’t using a strong enough grit on the sanding discs so it took WAY longer for the first two than it did the final four chairs. Once I changed that out, it buffed everything off quite nicely.

Since the chairs had some smaller areas the sander couldn’t reach, I also had to use a chemical stripper and scrape the rest off. This was the worst part of the entire process and there were still a few areas I just couldn’t quite get completely clean, so there’s still a little bit of the old varnish on the chairs, but I decided that gives them a little character.

To use the citrus stripping gel, I painted it on the spots that contained varnish. Then, it had to sit for a while – an hour seemed to be a pretty good length of time. You will know it’s ready to scrape off when the gel turns white.

The gel is still somewhat sticky, so once you’ve got most of the varnish scraped off, the wood will need to be cleaned with a special cleaner or mineral spirits.

I had the person who made our table save me the leftover stain she used, so once the mineral spirits were dry, I applied two coats of stain to the freshly sanded wood and finished with a coat of clear poly to seal everything together. Here’s a side by side so you can see the difference.

Finally, I added new felt pads to the bottom of the chairs since most of them had fallen off or were in pretty bad shape.

The chairs don’t exactly match the table (they look much closer than in the photo for some reason), but they still look quite nice and I’m excited to start hosting family get to-gethers in the space!