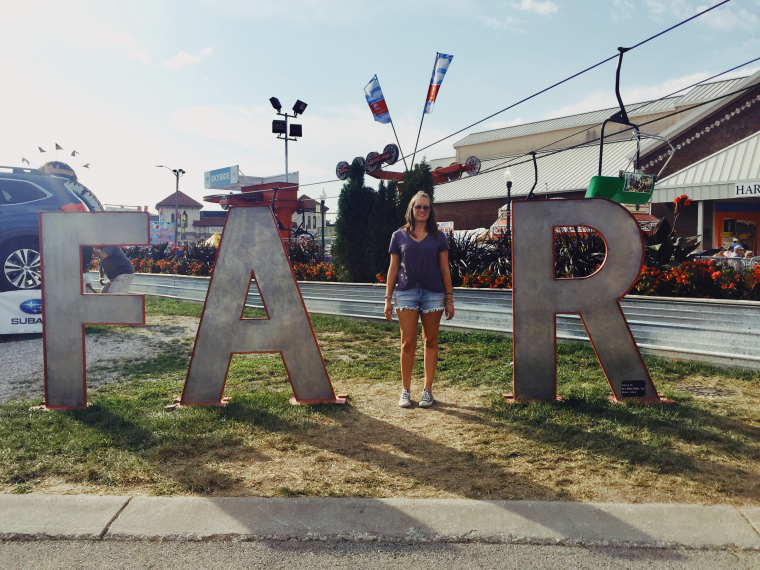 I kind of forgot how much I love going to the fair. It was a summer staple growing up – I was a 4-H farm kid and showed my mini lop rabbits for 10 years at the Gibson County Fair. A few of my other projects made it to the state fair and we came up a few times to see them, but other than working at the library’s booth, I don’t think I’d really had the fair experience for about five years.

Hanson played on the free stage Friday night and a bunch of my Kentucky crew came up for it, so we decided to make an afternoon/evening out of it and had so much fun!

I tried the lemonade strawberry boba first thing and it was kind of like an elevated lemon shake-up. It’s supposedly new to the fair this year. The bobas at the bottom of the drink are squishy liquid filled creations that didn’t really dissolve, so I had to fish them out at the end to get them all.

I also had the best funnel cake known to man. This booth is over by the midway area and has a bunch of different flavors like red velvet and mint chocolate chip. It was by far the best thing I ate at the fair and I almost finished the whole thing off by myself.

The fair also has an upscale beer/wine garden of sorts this year. Maybe it was there last year too, but for those who enjoy an adult beverage, there are moonshine lemon shake ups, alcohol infused ice cream and sangria along with local Indiana brews to choose from.

Also new to the fair this year: the Subaru skyride. I couldn’t get anyone on it with me but enjoyed my solo ride from one end of the fair to the other.

I also got some fried okra, so I wasn’t just eating sweet foods. Verdict on that: not great. My homemade okra is way better. Should have gone with something else, like the inside out grilled cheese, which was on my list to try but I got too full before I found it.

Then it was time for the main event: Hanson! It was SO NICE to not have to travel very far to see my favorite band. I don’t think they had played in Indy since 2011 and it was long overdue. Hanson, if you’re reading this, us Hoosiers are tired of fighting Chicago traffic to see you at the House of Blues.

The place was really full – the usual crowd was there at 3 p.m. waiting out in the hot sun (not doing that anymore) and there was actually some seating, which is rare at a Hanson show. We however, did not get to sit down because by the time we were done doing fair things, all seats were taken and it was standing room only.

Great show, great set list and lots of energy from my favorite band. Come back next year!!

One thought on “Indiana State Fair”