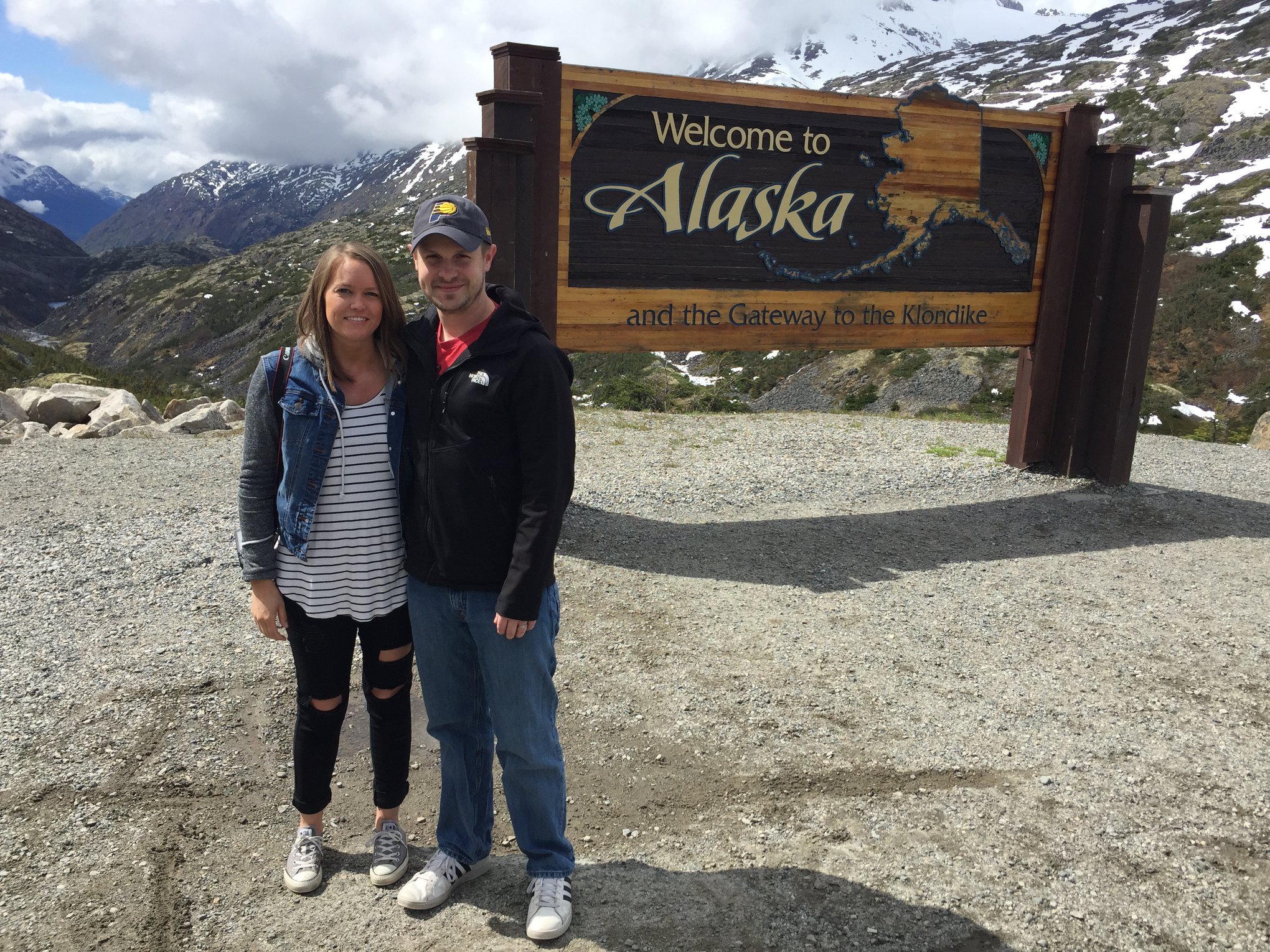 Alaska has been on my must-see list for years and coincidentally, the 49th state became my 49th state to visit. We talked about going last year but decided on Italy and Greece instead. This year, we made it happen though and were not disappointed!

Instead of flying and driving through the state, we opted for a seven day cruise as many places can only be reached by plane or boat anyway. Our ship, the Ruby Princess, left from Seattle, Washington and took us to Juneau, Skagway, Glacier Bay National Park, Ketchikan and finally Victoria, British Colombia before returning to Seattle.

Our first full day was spent at sea – it’s 902 nautical miles from Seattle to Juneau so we had a lot of ground to cover before docking early on Monday morning. It was kind of nice to have that first day to explore the boat, enjoy the food and take in some of the on board activities around the ship.

I booked two excursions for Juneau – one that Adam and I did together and another I did alone. We took a short bus ride to Mendenhall Glacier, hiked a trail that took us to a waterfall and a great view of the glacier, then hiked back to get warm in the visitor’s center before catching our bus back into town.

I grabbed a quick lunch, then set off on my second tour of the day – Sled Dog camp! The bus took us up into the mountains where we met several teams of sled dogs, many who had run Iditarod races. They divided us up into groups of six and we all got to ride behind in a “sled” while the dogs raced through the forest. I was really surprised at how fast a team of dogs can run and impressed that they were pulling about 1,000 lbs. of weight with no problem. We then learned about the dogs, met some PUPPIES and had hot chocolate before heading back to the boat.

Our next port of call was Skagway, Alaska. An even smaller town than Juneau with less than 1,000 people living in the area, Skagway was once home to the White Pass Railroad, an important part of Alaska’s mining past. Now it takes tourists to the top of the mountain and back.

Skagway has no dentist or doctor – residents in need of emergency medical care have to be flown elsewhere for serious medical care and our tour guide told us most carry a special insurance plan that covers the cost of medical evacuation.

The weather in Skagway was beautiful. Sunny and mid-50s, we only needed light jackets even when getting out at the top of the summit. Most tourists take the train, but in my quest to get photos at all 50 state signs, taking a small bus was the only way to achieve that in Alaska. I’m actually really glad we did this tour anyway, because hearing people talk about the train, you aren’t allowed photo stops and we definitely enjoyed seeing the scenery.

Our fourth day on the cruise was spent taking in the beautiful scenery of Glacier Bay National Park. Park rangers boarded the boat and provided commentary about the glaciers that we sailed by as well as nature talks in the theater.

The captain of the ship stayed at the most famous glacier, Margerie Glacier, for about an hour and we sat outside on the deck to take in the cool blue/green waters, calving glaciers and fresh Alaskan air.

Day five took us to Ketchikan, where we disembarked fairly early in the morning and only had a few hours in the port. I had scheduled a hike through the Alaskan Rainforest Sanctuary in hopes of seeing some more wildlife and we had another pretty good weather day for that. It misted a bit but nothing heavy and stopped pretty much right after we started our hike.

No bear sightings, although we did see signs of them. In addition to the rescued bald eagles they had on site, there was a pair nesting up in some trees and that was neat to see. After our hike, it was back to the boat for another day at sea.

I was a bit disappointed we didn’t really get to explore the town – it would have been nice to have a couple extra hours so we could look around on foot but at least we got to see it from the bus.

Our sixth day at sea seemed incredibly long – we pretty much exhausted all the trivia contests and game shows on the boat that day and also went to the final “Voice of the Ocean” competition. About half of day seven was also spent sailing until we got to our final port: Victoria, British Colombia.

We weren’t there very long either and arrived in the evening, so daylight hours were short. I booked a whale watching excursion at the last minute because at that point, I’d only seen one humpback whale and really wanted to see more. Unfortunately, that didn’t happen, although the tour company really tried to find some they’d located on the tour just before us. We got back as it was getting dark, so they took us on a boat tour of the harbor, which was lit up at night.

From there, it was back to the states and we were one of the first groups off the ship the next morning. We picked up a rental, drove 3 1/2 hours to Spokane so I could get the Washington and Idaho state signs, then flew home on Sunday.

It was an amazing trip and I highly recommend taking an Alaskan cruise if you can! We would have loved to have seen Denali National Park and Anchorage, but time didn’t allow for those stops this time – maybe someday we’ll get back!

We used Princess Cruise lines, which I have used twice before – once for a British Isles cruise and also to the Caribbean. The boats all seem the same to me, but the service, activities and food was exceptional.

I’m not sure where we’ll go next – I have a couple short trips before the end of the summer but we’re exploring traveling internationally again as well as either going to the east coast (which I tend to neglect) or San Francisco.

So much to see, so little time to see it all 🙂

You probably heard me mention that I’m helping p

#Indy is a city for writers! There are so many lit

We made it to Friday! It was an unusually busy we