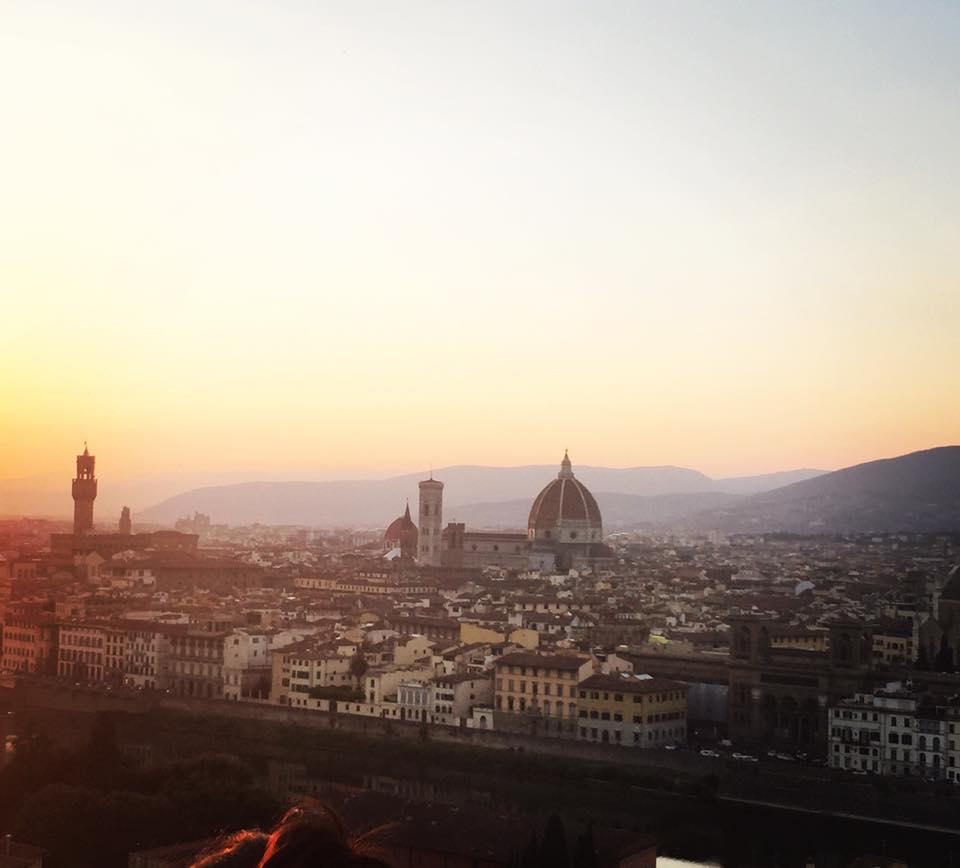 Starting on June 12, Adam and I took a 12 day trip to Italy & Greece. We booked the trip last November and after a lot of research and searching, we decided on Cosmos, a budget friendly tour company that I found online last year. We considered cruising but I was unable to find a cruise line that took us to all the places we wanted to go and since Europe is so far away, we decided on a bus tour instead.

Since there were so many sites and activities packed in to the twelve days of the tour, I am blogging the trip in three parts because that’s too much info for one post! Our flight left Indy in the afternoon and we flew overnight to Rome. Italy is six hours ahead of Indiana so we arrived in the morning.  The flight was full and it was nearly impossible to sleep so I watched a movie and Game of Thrones to pass the time.

The transfer to our hotel from the airport was included with our trip, which was also helpful because traffic was crazy & our phones didn’t work very well the entire trip so my plan to use Uber if needed wouldn’t have worked. Our hotel was pretty nice and a great view of the Vatican was just a short walk up the road. That evening we met our tour guide Giuseppe and the twenty four other travelers in our group. All except four were from the US and seven of us were from Indiana! The other four were from Canada and we had a lot of mothers & daughters traveling together in our group.

Our first official day started in Rome on the 13th. We were up early for the morning tour of the Vatican. With the trip, many of the sightseeing excursions were included but like on a cruise ship, there were also some extra optional tours you had to pay for. We thought we’d be able to do the Vatican/Sistine Chapel on our own instead of taking the optional tour but unfortunately once we got there, our guide said we didn’t have enough time so since we didn’t join the pre-arranged tour group, we weren’t able to see the Sistine Chapel. However, we explored St. Peter’s Square and Basilica on our own and climbed almost to the top of the basilica for some amazing views of the inside of the dome and Rome.

After most of the morning at the Vatican, we grabbed lunch then rejoined the rest of the group for the tour of the Colosseum and the Roman Forum. By this time, it was HOT. I had a long dress on too because they were very strict in the churches in Italy – legs and arms had to be covered or they would turn you away. The great part about Rome was the natural spring water flowing from fountains all over the city – a much needed refreshing drink for the 90+ degree days and hot sun!

We went by bus to the Colosseum and since we were with a tour group, another plus was getting right in and not having to wait in lines in the sun. Our group went in a special entrance that took you down on the floor where the gladiators came in and we got to see the inside from a different vantage point than most people. We had a local guide who took us through and talked about the history, then walked us through most of the Roman Forum which is up the hill from the Colosseum.

Our final part of the day was an optional dinner and walking tour of some of the famous landmarks of Rome. The walking tour started near the Pantheon, took us through some famous squares, including the Trevi Fountain (which was packed with people and you could barely move) then concluded at the Spanish Steps. We walked up those for a great view then the bus took us to our dinner. The bad part about the included dinners – you had no choice in what you got to eat and some of the food in Italy wasn’t quite what I expected.

That night’s dinner was FIVE courses. The first was a meat and cheese plate, which I got really sick of seeing since that was at breakfast every morning. I am not a cold cuts type of person at breakfast. Then we were brought a weird pasta dish which would have been good except it had a mushroom sauce which I could not eat. Then, lasagna, which I thought was really good, a salad with that and then the main course was a chicken dish with a tomato sauce. I thought the chicken was bland and dry so I didn’t enjoy it very much. We got a yummy sorbet for dessert.

On day three, we left Rome by bus and headed toward Florence. On the way, we stopped at the Leaning Tower of Pisa and were hoping to walk to the top but tickets were sold out 🙁 It was super hot again and by the time we got there, the mid-day sun was beating down on the thousands of people trying to all take the same photo, haha.

After leaving Pisa, we continued for another couple hours until we reached Florence. Our hotel there was a former convent & it definitely looked like one! The rooms were very basic and you could imagine a nun sitting at the desk in the room reading the Bible. That night we were on our own and caught the city bus to downtown Florence where we ate, met up with Adam’s cousin that we didn’t know was studying abroad there and also had our first taste of gelato!

The next day was a full day in Florence. The morning started with a leather working demonstration at a local shop then a guide gave us a walking tour of the center of the city. The churches in Florence are unbelievable and huge. We also didn’t realize how important Dante was to the Italian culture – his former home and church is there and our guide said he’s considered to be the father of Italian language. We had free time after the tour so we grabbed lunch, more gelato and did some shopping. We tried to see the David statue but tickets to the museum it’s housed in were sold out for a week due to cruise ships coming in with big groups.

That evening we had another included dinner which was probably the best Italian food of the trip. Another multi-course meal, the dinner started with the usual meat and cheese tray then was followed by salad and a potato stuffed ravioli. Then the meats were brought out – steak, chicken and pork chop with potatoes. Dessert was more gelato (haha) and biscotti that was dipped in some really awful wine. The night ended with a sunset view of Florence.