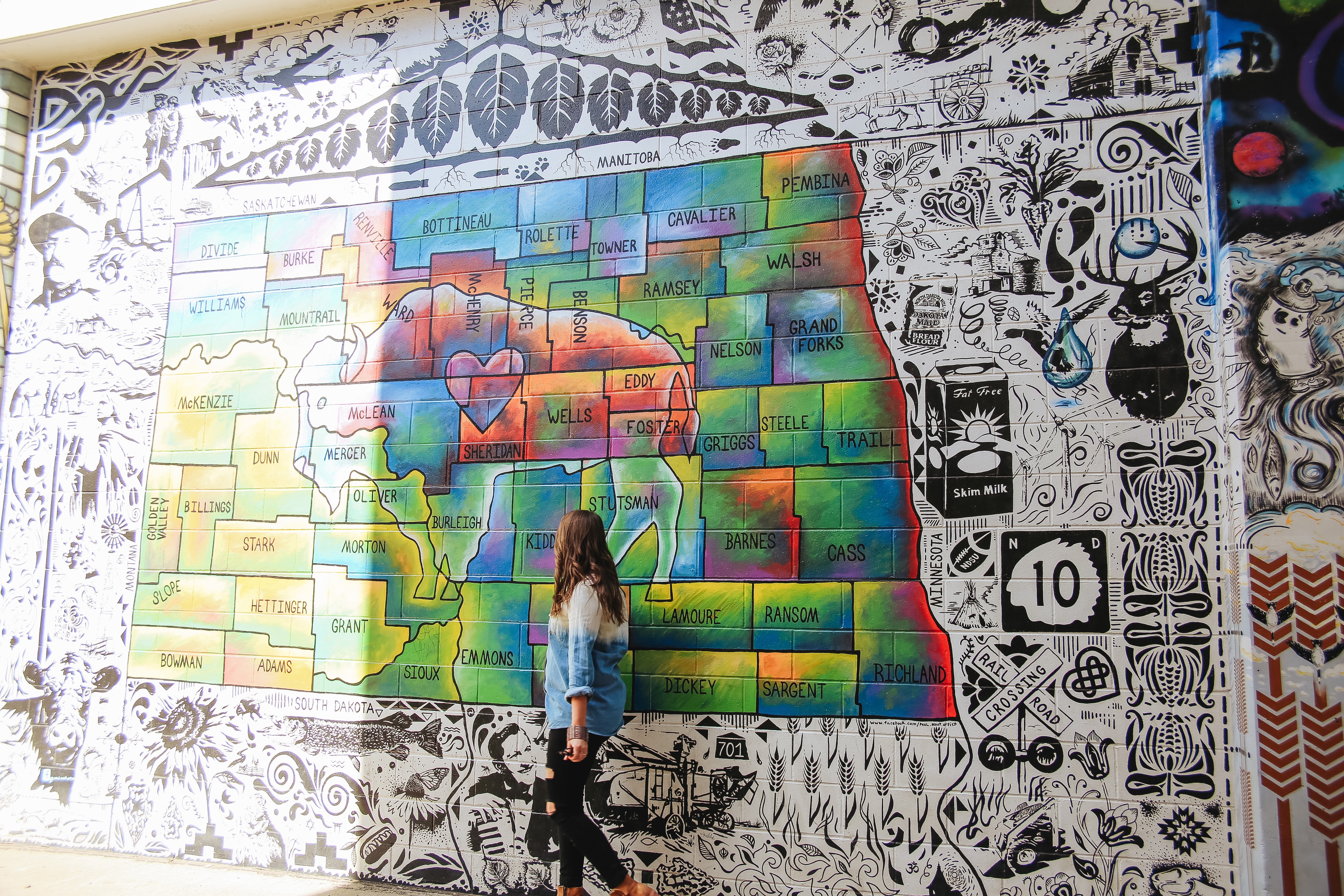 I don’t even remember the last time I went to North Dakota. Maybe it was during middle school when we drove to Glacier National Park? Either way, a return to the state was long over due!

After leaving Devil’s Tower in Wyoming, we made the four hour drive up to Medora, North Dakota. If you enjoy big blue skies, lots of space and hundreds of miles in between towns, that drive is perfect for you! Several towns only had 15 – 20 people living in them and Medora itself has a population of 112.

There’s not a lot there, but it’s the perfect jumping off point to explore Theodore Roosevelt National Park. The entrance to the south part of the park is literally at the end of the main street that takes you through town.

Since we were there just before Labor Day, things were closing up for the season and there were only a couple restaurants open in town. I did enjoy a Bison Burger at Boots Bar & Grill and some delicious green bean fries at the Little Missouri Saloon.

There’s also a candy store with some pretty tasty flavors of taffy if you like that!

Teddy is one of my favorite U.S. Presidents, largely for his conservation efforts and establishing the National Parks, so it was really cool to see the land that inspired him in his prime.

Throughout the park there are several scenic pullouts where you can overlook the North Dakota Badlands and maybe catch some views of wildlife. We found buffalo, wild horses and prairie dogs!

Make sure you also stop at the Painted Canyon overlook – this is a beautiful spot to see at sunset and the pictures really don’t do it justice! Even if you’re not stopping at the park, you can access this overlook just off the interstate and it’s well worth the stop.

Due to time constraints, we only stopped at the southern part of the park (you have to drive to the northern park and it’s over an hour to get there), but since we were so close to Montana, we did pop over the state line to get a photo with the state sign.

Our third day in the state took us back east as we drove all the way across to Fargo. The drive was incredibly easy, although there aren’t a lot of attractions along the way.

A fun detour we took off the interstate was to drive the 32 mile Enchanted Highway. You can see “Geese in Flight” from the highway, so if you aren’t able to take that much time, at least stop there to admire the art.

The Enchanted Highway is the world’s largest collection of scrap metal art sculptures. Local artist Gary Greff works with the state to maintain the pieces but originally funded the installments himself.

We also stopped in Bismarck to see the state capitol building, along with the art alley downtown.

After driving all day, our final stop in North Dakota was overnight in Fargo. Definitely the busiest town we’d been to in days, there are lots of hip restaurants downtown as well as a great local art scene. I’d love to go back when I have more time!

Before heading out of town the next day, we stopped at the Fargo-Moorhead Visitors Center where you can see the Fargo Walk of Fame and the wood chipper from the movie “Fargo.”

Then it was time to say good-bye to the Dakotas and make the six hour drive back to the Omaha area where we were catching our flight home.

When 2020 started, I had big travel plans for Boston or even possibly another trek over to Europe. But a pandemic had other ideas and forced us to discover states many people only drive through. It wasn’t the vacation I planned, but it was a much needed trip away and I definitely recommend you see the beautiful landscapes, vibrant murals and National Parks that the Dakotas have to offer.

Here’s What You Missed!