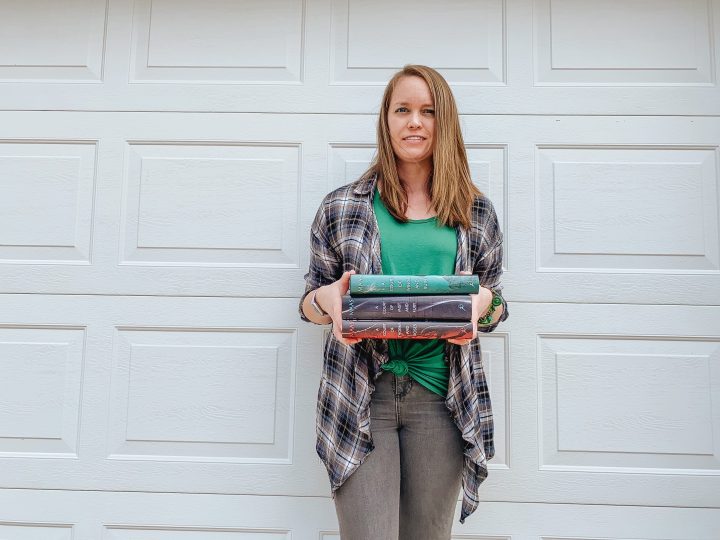 Hopefully you’re staying home, staying healthy and safe while we figure this pandemic mess out – my library closed yesterday until further notice, so I’m home with some free time and plan to get caught up on my Goodreads reading goal. I’m several books behind (oops) so I believe I can get caught up in the next couple of weeks or however long the quarantine is going to last.

You may be looking to catch up on reading too – I hear so often that people don’t have time because life is so busy. Now is your chance! I’m sharing five fantasy series I love and since we’ll be in for a while, I thought series were the perfect choice because you can binge the whole set at once!

A Court of Thorns and Roses by Sarah J. Maas

Shelved in young adult, this steamy faerie action/romance series is definitely NOT for the younger crowd. The first book starts off as a retelling of “Beauty and the Beast” and the action only ramps up from there.  After ninteen-year-old Feyre kills a wolf in the forest that turns out to be fae, she’s kidnapped and taken to the faerie land of Prythian to pay the price.

In the subsequent books in the series, “A Court of Mist and Fury” and “A Court of Wings and Ruin”, Feyre struggles with the decision to become fae herself, a set of trials set forth by the Queen Amarantha and her own family being put in danger. Of course there’s also a love triangle and if you are looking for something steamy, this trilogy delivers.

The Magicians by Lev Grossman

While attempting an old spell, Quentin unleashes an ancient evil called “The Beast” on the school. Quentin and his friends attempt to defeat the “The Beast” and discover along the way that Fillory, a fictitious land much like Narnia, is actually real.

This is a fantastic series for adults with a lot of literary elements that make it a joy to read. Some of the characters are downright unlikeable, but it’s still one of the best fantasy series I’ve ever read for adults.

Children of Blood and Bone by Tomi Adeyemi

If the cover doesn’t draw you in, the story definitely will. Children of Blood and Bone by Tomi Adeyemi is inspired by West African mythology and revolves around Zélie Adebola who is discovering that magic has not completely left the world even though all the maji have supposedly been killed. In a race against time, Zélie set outs with a rogue princess to bring magic back and launch a revolution against a tyrannical regime hell bent on wiping people like her out for good. Don’t let the size intimidate you – at 544 pages, this is an intense book to dive into, but well worth it for the supreme storytelling and lush world building.

Described as Black Panther but with more magic, this inventive new series is the next big thing in young adult fantasy. Only the first two books are out, so if you don’t mind waiting for book three, this is the perfect series to keep you entertained while hanging out at home for the next couple weeks.

The Lunar Chronicles by Marissa Meyer

Cinderella as a cyborg? These reimagined fairy tales follow Cinderella, Little Red Riding Hood, Rapunzel and Snow White through a futuristic world where people of earth, cyborgs and people from a lunar colony are experiencing extreme tension.

An evil queen is trying to wipe out earth’s population with a plague, so Cinder, along with several other classic fairy tale characters team up to try to defeat her and save both Luna and Earth. There are four books in the series (along with a few short novellas) and the entire series is a fun, sci-fi take on the classic stories you know and love.

The Chronicles of Narnia by C.S. Lewis

I had to throw a classic in here! After Harry Potter, “The Chronicles of Narnia” is my next favorite fantasy series. C.S. Lewis opened my eyes to a whole other level of storytelling as a child and re-reading it as an adult is a unique experience as well because you see the allegories that you missed as a kid.

Narnia is a fictional fantasy land that various children find over the course of the seven books. Most notably are the Pevensie children who first find Narnia by a secret door in the wardrobe. Talking animals, witches and fantasy creatures play important roles in the stories, as does the great lion Aslan, who helps the children overthrow the White Witch’s control over Narnia in the first book.

Those are just a few of my favorite fantasy series! Got any recommendations for me? Be sure to comment and tell me what you think I should read during all my newly found free time! Happy reading – stay well, safe and practice good social distancing and cleanliness. We’ll all get through this together.