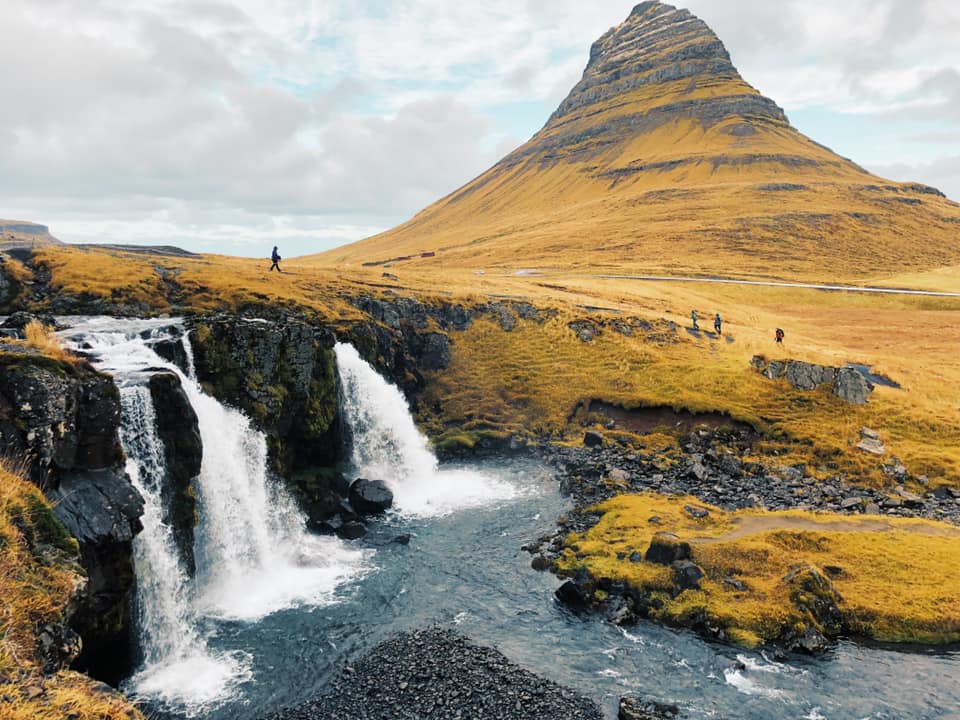 We had another long drive across the northern part of Iceland, so we were up and on our way toward the Snaefellsnes Peninsula right as the sun was coming up. About 30 minutes outside Akureyri, it started snowing! We were still in the mountains, so this made me a little nervous but it wasn’t a heavy snow and there were other vehicles out, so the road cleared pretty quickly.

A couple hours into the five hour drive, we stopped to see some traditional Icelandic turf houses in the tiny town of Glaumbaer.  People to lived in the Glaumbaer turf houses up until the late 1940s and the farm they sit on has been there since the year 874. There’s also a church on the grounds. It does cost to go in the turf houses, but you can still walk around the grounds for free. Tourist season runs through the end of October but you have to make a request in advance to tour them at that time of year, so no one was available to give us a tour. It was still worth a stop just to see a piece of Iceland’s history.

The next stretch of road was pretty long but took us to the western part of Iceland, through more snow, mountains and even past a couple active volcanoes. We left the Ring Road for a bit to get to Grundarfjordur, our stop for the night.

The town itself doesn’t have much to offer as far as amenities but it’s only two hours from Reyjkavik so if you don’t do the entire Ring Road like we did, its definitely worth a day trip to see Kirkjufellsfoss, the most photographed sight in Iceland.

Although you can’t tell from this picture, there were lots of people at this site and we had trouble finding a place to park along the side of the road. Huge bus loads of people were arriving the next day too, so if you want it to yourself, you might try to get there early. Game of Thrones fans will definitely want to visit Kirkjufellsfoss  – several scenes from “beyond the wall” were shot here.

We spent the night in  at a hostel and ended up cooking our dinner that night because food options are almost non-existent with the exception of the grocery store and a pizza place. The plan was to eat at a food truck but after being unable to locate it and finally asking about it, we were told the owner had already packed up for the season.

The next day, we headed back toward Reyjkavik, stopping at the Little Black Church and to snuggle up to some friendly Icelandic horses.

A word of warning – our GPS tried to take us on a sketchy road to get to the Little Black Church. It was unpaved – at least the part we could see – and went up into the mountains. We were both uncertain about taking that way because neither of us wanted to have a flat, so we backtracked a little bit and went back the way we came into Grundarfjordur instead. It added a little bit of time, but not much and it just felt safer to us. Always trust your gut!

There’s a path from the Little Black Church that leads down to the sea and through a lava field. Short and unique hike and well worth an extra few minutes at the church if you need to stretch your legs.

There are quite a few other things you can do on the Snaefellsnes Peninsula, but due to time constraints, we had to skip them. If you’re thinking of going, definitely look into Snæfellsjökull glacier, which is featured in the movie Journey to the Center of the Earth.

Here’s a map of our stops, including the Little Black Church, which we actually did on a different day but I included since it’s so close to Grundarfjordur.