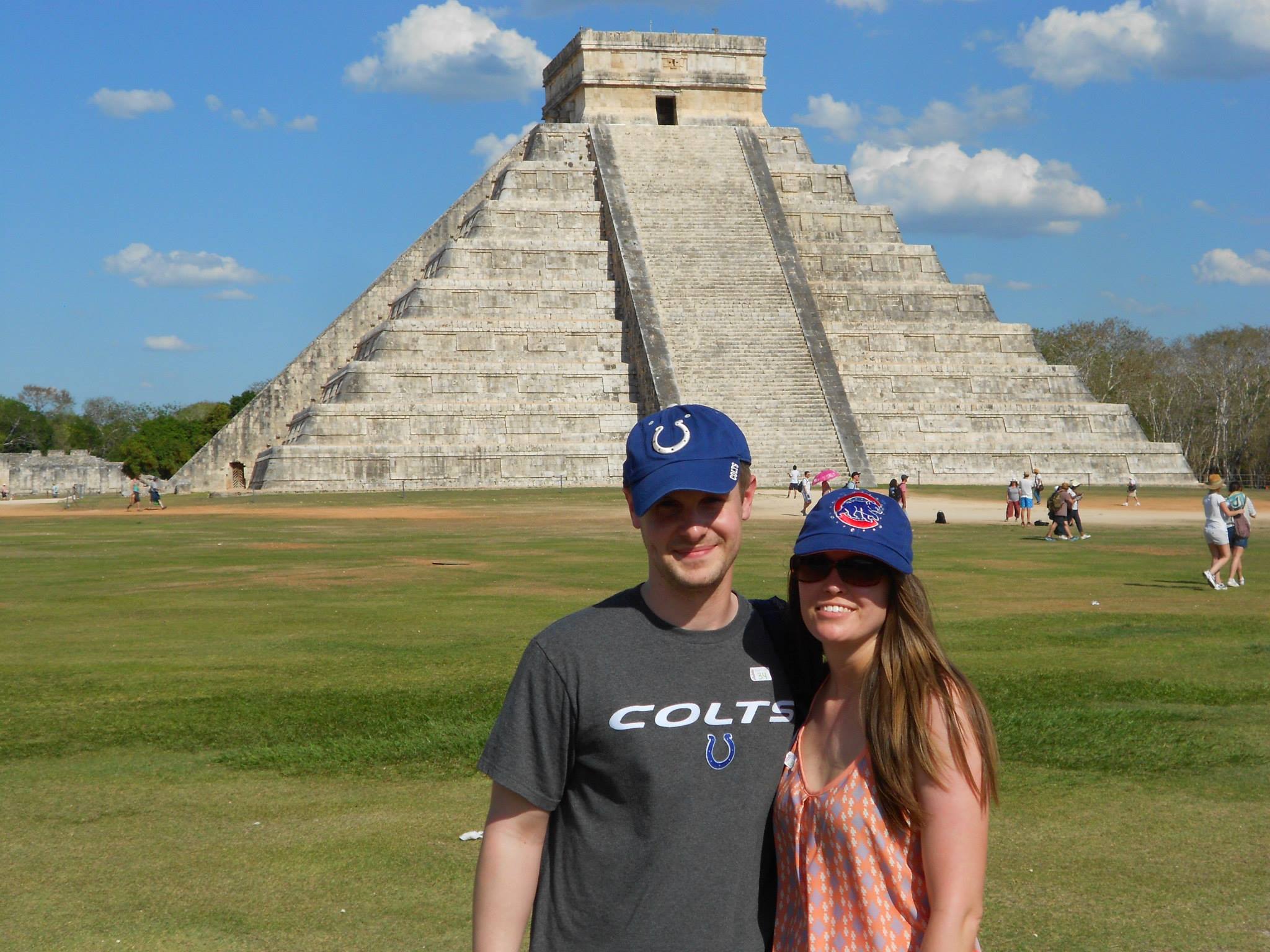 When choosing a honeymoon destination way back in October, we both decided we wanted to go someplace warm where we could relax. I definitely did not want to go to Gatlinburg (boring!) like everyone else seems to do and our other choices, Hawaii and Greece were just a little bit out of our price range. So we decided on Cancun and after several weeks of obsessively watching prices on some all-inclusive resorts, I got a great deal on a vacation package that included our flights and 6 nights at the Villa del Palmar resort in Cancun, Mexico.

We opted to leave on Monday morning instead of the day after our wedding, which turned out to be a wise decision since we had to pack the cats up and send them home with my parents for the week. Our flight left Indy around 8 AM, we had a 3 hour layover in Dallas, then arrived in Cancun about 4 PM that afternoon.

We’d barely gotten off the plane when Adam discovered his wallet was missing. Fortunately, we hadn’t gone through customs or gotten out into the airport yet, so he went back and an airline employee found his wallet near his seat. Nothing was missing – it had just fallen out of his back pocket. We were very relieved. The customs line moved pretty quick and we were off to find our transportation to the resort.

It took about a half hour to get to the resort from the airport – we were located in a more remote part of Cancun, which was actually really nice because we were away from the hotel zone/busy downtown area and it felt more relaxed. There were also six restaurants on-site with a variety of food to choose from and a private beach. Here are a few photos of where we stayed!

Tuesday was our first full day there and I hadn’t pre-planned anything because I thought we might just want to relax. When we checked in, the concierge signed us up for a presentation about the resort’s travel club and a free breakfast just for listening to their speech. Free is always good, so we took advantage of it even though we weren’t planning to join.
Wednesday was our tour to one of the seven wonders of the new world – Chichen Itza. Roughly 2 1/2 hours from Cancun, our tour bus took us to an old church, swimming in a Cenote and lunch before dropping us off for a guided tour of the Mayan ruins. The ruins were built sometime before A.D. 600 and were really spectacular to see. We were disappointed that you couldn’t still climb the stairs to the top, though.

On Thursday, we had another lazy day at the resort but did enjoy sitting on the beach after dinner and watching the sun set. The weather was perfect all week and even at night, the temperature was warm but not humid like it is in Indiana. After the sun went down, we decided on a night time swim in one of the resort pools and finished off the evening in the hot tub.

Friday morning we decided to leave the resort for a little bit. We didn’t go far – just to check out the ferry to Isla Mujeres which was just down the street. On the way to the ferry, we discovered lots of iguanas lounging around on some concrete near the docks.

Later on that afternoon, I borrowed some snorkeling gear from the resort and spent some time snorkeling in the Caribbean. While this definitely wasn’t the best snorkeling experience that I’ve had, it was still fun to see what was living under the water. I saw a few fish I had never seen before as well as some unique looking plant life. The fish were not all that colorful, but I did see a neat looking striped one. After snorkeling, I hung out in the resort pool while Adam decided to go back to the room to relax until dinner time.

Saturday was our last day in Mexico, so we lined up transportation to downtown Cancun and spent several hours walking through the market place. Everyone was desperate to sell us something and the vendors would practically grab you and pull you in to their stores. I don’t like to be bothered when shopping, so after a few hours of that, I was kind of exhausted. Even the waiters from the restaurants attempt to get you to stop and eat – bringing out menus and trying to force you to sit down and order. Eventually we did stop to get some authentic Mexican food and I discovered that I actually kind of like guacamole when it’s fixed right!

After lunch, we had about an hour and a half before meeting up with our ride back to the resort and started making our way out of the marketplace…or so we thought. Somehow we had gotten disoriented and started walking around in circles – it was very much like a maze and we couldn’t figure out how to get out of it on the correct street. We thought we had picked the correct direction to walk but after a while, it didn’t look familiar and I was starting to get nervous that we were going to miss our ride and get kidnapped. We circled back by the restaurant where our super nice waiter drew us a map to get us out and we made it back to the meeting point and were only a minute late. Thankfully the van waited for us and we were on our way back to the resort! That night we decided to order in room service, then walked down to the beach for one last look at the sun setting over Cancun.

Sunday morning came too soon – we were up at 4 AM to get back to the airport where we ALMOST didn’t get on the plane! I had no idea I was supposed to have immigration forms out to hand to the gate attendant and when she asked for them, I panicked because I didn’t know where they had gone. Thankfully, I found them in my suitcase and we were the last to board the plane. Our airline flew us to Miami, where we had an 8 hour layover (yuck). I ran into MORE issues there when scanning my passport at customs and getting “flagged” for having a common name. The machine we checked in on put a huge X over my picture and I had to take it through the line where the agent said they had to make sure I wasn’t someone they were looking for. I guess I passed because here I am back in Indiana!

I really can’t say enough about how wonderful Cancun is. It’s been about a month since we got back and Adam and I still say that we wish we were back there. The resort was fabulous and once we figured out the pesos to dollars conversion rates, we ate really well yet frugally. It was also nice to just have time to relax – something I really don’t do when I travel. Like with all trips though, it’s always good to be back home 🙂